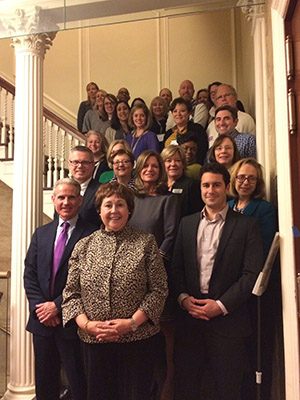 Maria Russell, front, second from left, was honored with a public relations scholarship created in her name and unveiled at a recent luncheon.

The announcement was made Friday at a luncheon in New York City, which was part of a three-day professional development event for students and alumni of the school’s executive master’s program in communications management. Russell founded the program in 1995.

Says Newhouse Dean Lorraine Branham: “Maria has been an integral part of the Newhouse School and the public relations department for 30 years. She has been a positive force not only in the school, but also—through the thousands of students and alumni she has taught and mentored—in the public relations industry, both in the U.S. and abroad. This honor is well-deserved.”

The Maria P. Russell Graduate Scholarship in Public Relations Leadership will be granted annually to a communications management student, and will be applied to the cost of tuition or related program expenses. Students will be eligible for the scholarship in their second year of the program.

The scholarship will be awarded based on the student’s academic achievements and potential for leadership in the communications profession, as determined by the program director and faculty.

“Recipients will be chosen based on qualities of academic excellence, dedication and professional achievement and service, as exemplified by Professor Russell,” says Anthony D’Angelo, who followed Russell as director of the communications management degree when she assumed leadership of non-degree-bearing executive education programs last year, another area she has pioneered within Newhouse.

Russell joined the Newhouse public relations faculty in September 1986 after more than 16 years of professional public relations practice. As chair of the PR department for three terms, she oversaw its tremendous growth and innovative programming, including the school’s first venture into executive education. She conducts executive education programs across the U.S. and in Canada and Brazil.

She has earned numerous national communications awards and recognition. She was inducted into the Public Relations Society of America (PRSA)’s College of Fellows in 1992 and named PRSA’s Educator of the Year in 1997. She was selected for membership in the Arthur W. Page Society in 1999. In 2012, the New York Chapter/PRSA honored her with the Philip Dorf Award for outstanding mentorship of students and young professionals. Last month, she was named Educadora do Ano 2016 (2016 Educator of the Year) by the Associação Brasileira de Comunicação Empresarial (Brazilian Association for Corporate Communication, or ABERJE).