The director of the Humanities Center is bringing national distinction to Syracuse University, thanks to a recent flurry of scholarly activity. 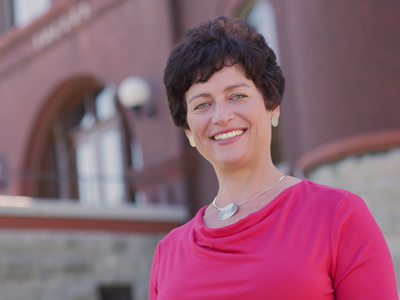 Vivian May, the center’s director since 2015, is the author of a new article in Hypatia: A Journal of Feminist Philosophy (2017) about the black feminist “love-politics” of Anna Julia Cooper, a 19th-century educator, writer and activist. The article comes on the heels of a December visit to Rice University in Houston, where May discussed Cooper’s intersectional vision and its continued relevance for combating inequality and pursuing broad-based forms of justice.

Before that, May helped organize the annual conference of the National Women’s Studies Association (NWSA) in Montreal. The conference, whose theme was “Decoloniality,” coincided with the end of her two-year run as NWSA’s president. The four-day event was the second-largest in the organization’s 40-year history, drawing scholars, educators, activists and public intellectuals from around the world.

All in a day’s work for May, whose Humanities Center is ramping up for another busy semester of events, not the least of which is the second half of Syracuse Symposium, whose theme this year is “Place.”

“Public scholarship and community engagement are integral to our institutional vision,” says May, a professor and former chair of the Department of Women’s & Gender Studies. “In addition to fostering intellectual engagement and supporting interdisciplinary research, the University connects the humanities with projects to advance democracy, social justice and the public good. Our center showcases how the humanities provide essential intellectual frameworks for tackling problems of broad societal concern.”

May says that humanists such as Cooper—who was born into slavery, only to become an internationally renowned author and educator, as well as the fourth African American woman to earn a Ph.D.—have long used intersectional scholarship to examine gender, race, class and nation, and to call for new ways of thinking about identity and the wider polity. (Intersectionality refers to overlapping systems of oppression, domination or discrimination.) “Love-politics” was Cooper’s way of trying to dismantle structural forms of racialized sexism and sexualized racism in the United States.

With time, Cooper’s work took up transnational questions more explicitly. At the first Pan-African Conference in London in 1900 and in her doctoral dissertation at the Sorbonne in 1925 (in which Cooper examined the treatment of slaves during the French and Haitian revolutions), she called for more “loving” forms of international political relations to combat the violent legacies of imperialism, colonialism and slavery.

“Cooper’s work has been mostly overlooked in feminist and anti-racist thinkings on love, affect and social change,” May says. “She thoughtfully analyzed love, marriage and gendered care-work in the domestic sphere. At the same time, she examined how notions of subservience or dependence in the family of nations had no place in an equitable world. Her notion of a reciprocal, political love-force sought to transform interpersonal relations, while fostering broad collaborative action to eradicate inequality.”

In her Hypatia article and at Rice, May explored Cooper’s views on elitist gender constructs, idealized notions of domesticity, gender’s unnecessary constraints (reinforced by religion, economics, education and the law) and the problems with romantic-love ideology. She says Cooper believed that, if any of these areas were left unchecked, the fight for women’s rights and civil rights would be undermined. 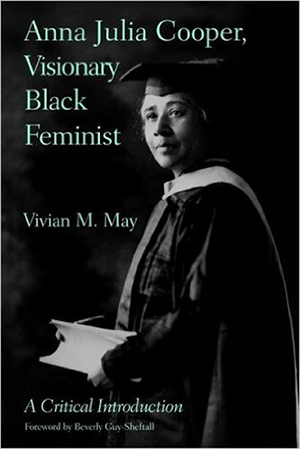 The cover of May’s new book on Anna Julia Cooper

“Cooper felt that prevailing ideas about gender roles, romantic love and marriage not only led to inequitable relationships, but also set the stage for larger societal problems, such as white supremacy, xenophobia and imperial rule,” May says. “Unfortunately, much of her work has been misunderstood or relatively unknown.”

At Rice, May gave a keynote lecture about Cooper titled “Raising a Voice in Protest, Issuing a Call to Action,” and then participated in a graduate colloquium. May drew heavily from her books “Pursuing Intersectionality, Unsettling Dominant Imaginaries” (2015) and “Anna Julia Cooper, Visionary Black Feminist: A Critical Introduction” (2007), both published by Routledge, and from some of her articles, including the current one in Hypatia.

“We considered Cooper’s work and legacy, as well as her continued relevance for social transformation, political protest and collective organizing,” says May, whose visit was sponsored by Rice’s Center for the Study of Women, Gender and Sexuality. “Although Cooper died in 1964 [at the age of 105], the nuance and complexity of her ideas are becoming more fully appreciated.”

Cooper is best known for “A Voice from the South by a Black Woman of the South” (1892), the first book-length volume on black feminist thought published in the United States. She also advocated for equal education for black women, called for a new African American literature that was grounded in black folklore and rejected ideas about justice that maintained hierarchy or pitted marginalized groups against one another.

A longtime resident of Washington, D.C., Cooper was the principal of and a teacher at the renowned Dunbar High School; co-founder of the Colored Women’s League; president of Frelinghuysen University; and founder of the Hannah Stanley Opportunity School, in memory of her mother.

While May is comfortable on the international stage and enjoys delving into Cooper’s contributions (one of her specialties), she is particularly excited about what is on tap this semester in the Humanities Center. May alludes to a spate of upcoming lectures, workshops, author readings and performances, along with a book-signing celebration and various events involving the center’s fellowships and distinguished visiting professorships.

“Our goal is to foster research, promote intellectual exchange and emphasize the deep relevance of the humanities to wider publics,” she concludes. “The Humanities Center cuts across the disciplines, as well as the schools and colleges on campus, to pursue enduring questions and to address pressing needs. We’re part of the University’s social contract.”