Photo Captures Best of Syracuse, but Who Are Young Men?

Syracuse University Provost Michele Wheatly brought the photograph home from South Carolina in November, after she made a trip to Clemson University. The image shows a group of young men surrounding a white-haired man and a woman, who is in a wheelchair. Everyone is beaming.

To Wheatly, the photo captures the best of Syracuse. 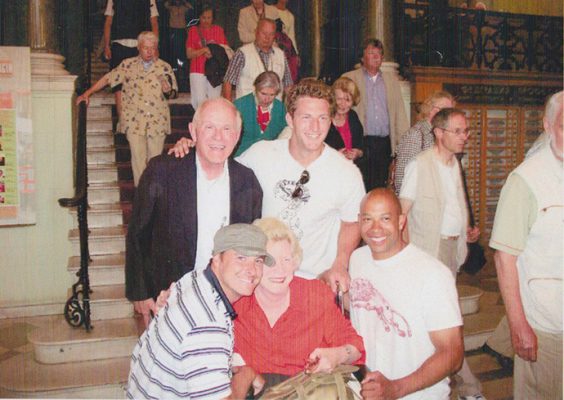 “It’s a great example,” she says, “of how people are inherently good, our students are inherently kind, and that even when they’re traveling around the world, learning about the world, they have an opportunity to make a difference.”

That she came into the photograph at all was an act of utter chance. Wheatly, who arrived at the University last spring, traveled to only one away football game this year. She went to Clemson because she is the longtime friend and former colleague of president James Clements and provost and executive vice president Bob Jones—and because she wanted a first-hand look at some of that university’s groundbreaking initiatives.

She also wanted to see the football game. As she walked into the president’s box at Clemson Memorial Stadium before kickoff, she was approached by Dr. Fletcher Derrick Jr. and his wife, Martha, who uses a wheelchair. Derrick introduced himself, then handed Wheatly a copy of “Surgeon/Spy,” a book he’d written about his life. The photo served as a bookmark, on page 109.

Derrick, 83, is a trustee emeritus at Clemson. He released his book last September, he says, “and I had sort of planned that when someone from Syracuse came to Clemson, I would hand it to them in the president’s box.”

He’d waited almost a decade to share the story he told Wheatly.

Derrick is a urologist in Charleston, S.C. He is a man of high energy who routinely shows up at his office. He and Martha also love to travel. That passion is not deterred by Martha’s wheelchair, which she uses because of a serious back condition.

In June 2007—while on a trip to Estonia, Poland, Finland and Russia—they stopped in St. Petersburg to see a concert by Russian Cossacks in what Derrick describes in his book as a “gorgeous castle or manor house.”

The problem: the performance was on the top floor. To get there meant climbing a towering stairway. There was no lift or elevator for Martha to use.

There was, however, a group of young men from Syracuse University, who happened to be there for the same concert.

They noticed the couple’s plight. They told the Derricks they were studying abroad for the summer, and they offered to help in the most fundamental way. “They were young kids, strong as oxen,” Derrick says. They lifted Martha, chair and all, and carried her to the top.

When the concert was over—a memorable one, as Derrick recalls—he and his wife faced the same challenge in trying to descend.

The students saw them, and volunteered again. “They made going down very easy,” Derrick says. They carried Martha to the ground floor, where they had a brief conversation with the couple. Then they left, almost certainly unaware of the impression they had made.

“It stuck in our minds,” Derrick says. “We told the story many times.”

He made a vow: Someday, he would thank someone from Syracuse University. The chance came in November, just before the football game. Clemson’s Tigers were the winners on the field, 54-0. But the Derricks and Wheatly, the new provost, had a moment of communion.

Wheatly returned to Central New York with a copy of the book and a photo of the students. At this point, no one has been able to identify them or their particular program. If you recognize the young men in the image, or if you happened to be there that day, feel free to send an email to seanpeterkirst@gmail.com. We’ll try to put the final touch on this story. Even if, in a way, the real meaning was written at the instant it came together, in St. Petersburg.

“We’re living in very difficult times,” Wheatly says, “and sometimes one tends to get overwhelmed, to wonder about what the world is coming to.”

It is reassuring, she says, is to know that people still respond with fundamental decency at moments when it matters, at moments when others are in need. That’s what happened during a concert in Russia nine years ago, and it made an unforgettable impression on a couple from South Carolina.

Sure, Wheatly would love to learn the names of the young men in the photo. But in a way, she knows them already.