College of Visual and Performing Arts (VPA) painting alumnus Ken Maxwell ’03 has established a fellowship in memory of his former professor at Syracuse University. The Ludwig Stein Memorial Fellowship supports a senior or seniors studying painting in the college’s School of Art. 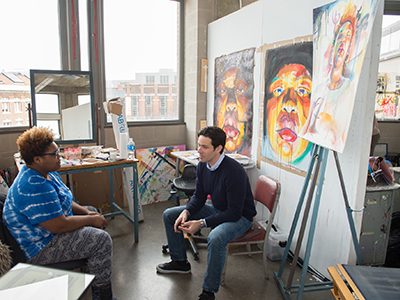 Stein taught painting and drawing in the School of Art for 42 years. He was a past chair of the former Departments of Art and Foundation, coordinated the graduate painting program for 28 years and taught for Syracuse University Abroad in Florence and London. He died in 2015, shortly after retiring from VPA.

Lena Blum ’17 and Adrianna Cummings ’17 were selected as the inaugural winners of the award. Each received $2,500 to put toward materials, experiences or resources to help realize their artistic objectives in their senior year.

“Pushing my limits and furthering the conversation has been my overarching intention this year,” says Blum. “The drive I have for my work lies in the making process. Because of this aspect, I enjoy working on more than one piece at a time, and in each piece trying to stretch my limitations and build up a larger vocabulary for my imagery. This award lets me create my work without an economical limit. I am not limited to material that I currently possess or material that I have scavenged. This freedom is leading my paintings to interesting new places that may have been out of reach if not for this award.”

“I’m involved in a lot of different art forms, including music, film, sound art, painting, illustration and digital art, so receiving this scholarship has really allowed me to make plans for my future I couldn’t otherwise achieve without the funding for equipment and art supplies,” says Cummings. “I really want to create a full body experience with my work and stimulate every sensation. I want to make people feel extremes of emotion; I want to overwhelm people with my presence, so much that I can never be smudged out. That I can never be silenced. That I echo in the mind.”

Born and raised in New York City, Maxwell graduated from VPA with a bachelor of fine arts in painting. After consistently exhibiting his own work, he decided to dedicate himself to becoming an art dealer. He began his career at Pace Gallery, where he worked for four years before transitioning to Gagosian Gallery as a director in 2007. At Gagosian, Maxwell has been instrumental in the production of numerous exhibitions, most notably Richard Prince’s celebrated “Cowboys” (2013) and “New Portraits” (2014). In summer 2014, Maxwell and the gallery collaborated with the Kunsthaus Bregenz for “Richard Prince: It’s a Free Concert.”

Maxwell is also involved with various museum groups such as the Guggenheim’s Young Collectors Council Acquisitions Committee, the Museum of Modern Art Junior Associates, the Patron Circle of the Metropolitan Museum of Art’s Apollo Circle and the Whitney Contemporaries as a patron founding member.