Tej K. Bhatia, professor of linguistics in the College of Arts and Sciences and director of South Asian Languages, has given plenary addresses at two distinguished conferences this fall. The first was at the 2016 Indo-French International Conference on Hindi Studies, held in September at Sorbonne University, Paris. The title of Bhatia’s address was “Discovering the European Hindi Grammatical Tradition.” 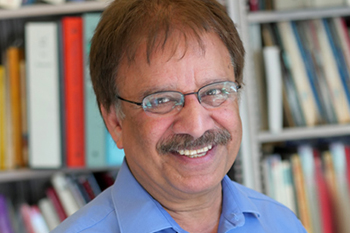 The second plenary address took place in November on the Syracuse University campus, at the 46th Conference of the New York State Teachers of English to Speakers of Other Languages (TESOL). His presentation centered on the key issue of how to empower rural farmers of India (and similar population)—economically and linguistically—by forging the new partnerships between social networking and marketing models.

“Tej Bhatia’s plenary was highly informative and easily accessible to his diverse audience,” says Maureen Edmonds, language coordinator at Syracuse University’s English Language Institute and conference chair, who introduced Bhatia. “Tej presented a wealth of useful new data from his research on rural farmers in India. He narrated his story and the stories of his research participants in vivid, personal detail, allowing his audience to understand and appreciate the problems and innovative solutions in the daily lives of Indian farmers. Tej’s comprehensive research and fluid narration made his plenary a success.”

Bhatia has served as director of the Linguistic Studies Program and acting director of Cognitive Sciences at the University. He was also a fellow at the Center for the Study of Popular Television at the S.I. Newhouse School of Public Communications. He is a recipient of the Chancellor’s Citation Award for excellence in research.

Bhatia has published a number of books, articles and book chapters in the areas of bilingualism, multiculturalism, media (advertising) discourse, socio- and psycho-linguistics, and the structure and typology of English and South Asian languages (particularly Hindi, Urdu and Punjabi).

He has been the recipient of a number of grants from the National Science Foundation, the U.S. Department of Education, American Council of Learned Societies, the Smithsonian Institution, Fulbright-Hays Faculty Research Abroad, Linguistic Society of America, American Council for Learned Society, Japan Science Foundation and American Institute of Indian Studies, among others. He has held visiting professorships at a number of prestigious universities in North America, Japan and India. He has also been a consultant to several academic, government and business organizations.