Since 2012, the Tanner lectures have provided the Maxwell School with the opportunity to bring prominent civic actors to the campus and speak on issues of ethics, citizenship and public responsibly. On Oct. 14, the Tanner lecture hosted former Philadelphia Mayor Michael Nutter.

Mayor Nutter discussed the Athenian Oath, carved on the walls of the Maxwell School, which states:

“We will ever strive for the ideals and sacred things of the city, both alone and with many; We will unceasingly seek to quicken the sense of public duty; We will revere and obey the city’s laws; We will transmit this city not only not less, but greater, better and more beautiful than it was transmitted to us.” 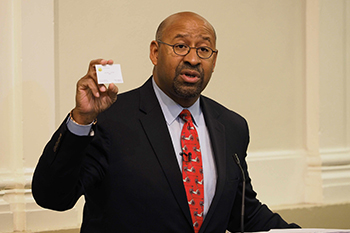 Former Philadelphia Mayor Michael Nutter displays the Athenian Oath, printed on the back of his business card. (Photo by Chuck Wainwright)

Nutter discussed the importance of the Athenian Oath in his life and tenure as mayor. He started by showing the last lines of the oath printed on the back of his business card. He spoke of his life and long career and his motivations to work in public service.

That career began when he started volunteering at the office of a city council member and then worked on the mayoral election of the first African American mayor of Philadelphia. He speaks of the life lessons he learned through these experiences that helped him to become successful.

“It was not about power,” he said. “It is about improving the life of others and utilizing the power and the authority that you have been given as a gift which you should appreciate, which you should treasure because it’s not just about you.”

“At that time I did not keep close track of the numbers. Public service was my main motivation.”

He spoke of the Athenian Oath as a motivation for his career.

“But it’s always been for me the part right at the end. … ‘We will transmit this city not only not less, but greater, better and more beautiful than it was transmitted to us,’” said Nutter.

He explained that one cannot always be admired and liked in office, and one has to make tough, unpopular decisions. But that should not be a deterrent to public service.

He shared a story of looming budget deficits and facing the prospect of budget cuts.  Any cuts in the budget usually impact numerous offices and personnel. Under those circumstances, he cut the city library’s budget because an aide advised him that it is one of the few budgets that could be reduced without impacting other departments.

However, that was a controversial decision, for which he was harshly criticized. From that experience, he said, he learned to ask for different opinions and consider different perspectives before making such decisions.

He spoke of the need for consistency in the actions of a public leader and asked the Maxwell students to mark his advice as a life lesson that took him years to learn.

“It is about leadership. It is about the consistency of the leadership, the integrity of your decision-making, and that is what the Athenian Oath is all about,” he concluded.

The event was attended by Syracuse Mayor Stephanie Miner, along with many University faculty members.