Woody Register tried to be realistic. “I kept telling myself not to get my hopes up,” says Register, a writer and historian, recalling the moment in 2012 when the staff in the Special Collections Research Center brought him “five or six” simple cardboard boxes. 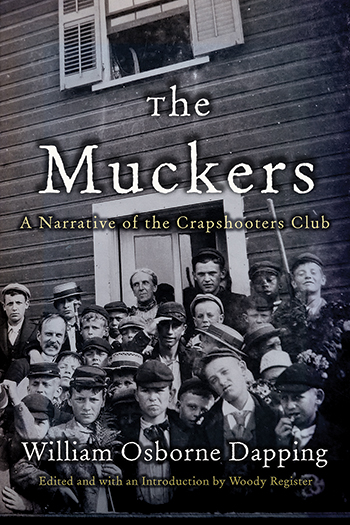 The cover of “The Muckers”

In one of the first ones he opened, in a kind of archival miracle, there it was:

A child’s life, caught on paper, that had seemed forever lost.

“The manuscripts were just lying on top of each other, not organized in any way,” Register says. “They were beyond yellow-brown, and very brittle.”

They represented an extraordinary historic find, the first-person account of a young 19th century gang member in New York City. William Osborne Dapping would become a respected Central New York journalist, a voter in the Electoral College, a man who won a Pulitzer Prize for his coverage of a 1929 prison riot for The Auburn, N.Y., Citizen-Advertiser.

When Dapping died at 89 in 1969, the Harvard graduate was eulogized by the New York Times as “an ardent Democrat and a leader in conservation and community activities.”

What went unsaid was the harsh forge in which he was raised: Dapping was a child of poverty in Yorkville, an Upper East Side neighborhood in Manhattan. His father, chronically unemployed and alcoholic, was a disabled Civil War veteran. His mother, a seamstress, took on the scraps of work that she could find, while their son learned to survive in the alleys of New York.

It was a “city of children,” Register writes, the streets packed with youths who were working, playing, struggling—and often joined together by street gangs. While adult writers and reporters gave the gangs a certain literary notoriety, few records exist of how those children themselves saw the world.

That is the value of Register’s new work, “The Muckers: A Narrative of the Crapshooters Club,” published by the Syracuse University Press. Register reintroduces Dapping’s 117-year-old narrative, in which the main characters—boys with such nicknames as Spike, Butts, Blinkey and Riley—cook up their plans in a damp basement clubhouse where an intruder might receive “a brick against his noodle.”

Dapping’s rise to journalistic prominence was an unlikely achievement, success in the face of overwhelming odds. It happened in an era, Register says, “when the idea that Americans celebrated social mobility, the rise from nothing to something more, was questionable.” 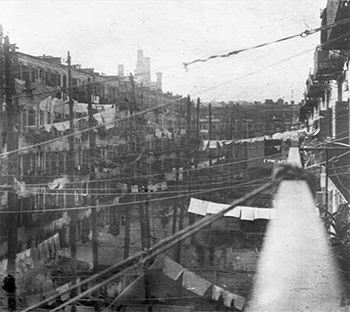 The tenements of Yorkville on Manhattan’s Upper East Side

So Dapping hid his origins. As a teenager, hardened by the streets, he accepted the chance to take part in a program called “The George Junior Republic,” an effort by reformers to save children who seemed doomed to lives of crime, neglect or addiction. Dapping was initially influenced by William George, founder of the republic.

Yet the great turn in Dapping’s life was meeting Thomas Mott Osborne, a wealthy young social crusader from Auburn. Osborne went on to gain national fame for his passion for prison reform. He’d sometimes masquerade as a homeless man, Register says, a chance to keep company with those who lived hard lives.

That behavior intrigued Register, an American history professor and department chair at Sewanee, the University of the South, in Tennessee. His initial research at Syracuse University, in 2008, centered around Osborne, whose papers are also part of Special Collections.

Through that research, Register began reading accounts of four boys—including Dapping—whose lives were transformed by meeting Osborne and George. Their struggles seemed far more compelling, to Register, than the tale of any wealthy benefactor.

Register says he felt “a gravitational pull” toward the narratives of children trying to escape from a bitter place. What he realized, reading of their lives as adults, was how they came to see any revelation of their true stories as a threat—rather than a monument—to their success.

“They never wanted people to know they came from the slums,” Register says.

That book remains a work in process. Yet as Register read through thousands of letters in the Osborne collection, he grew fascinated by Dapping, who was so close to the older man that he took “Osborne” as his middle name.

Register learned how Dapping, as a former street kid on the brink of attending Harvard, wrote a series of intimate sketches that described gang life in New York, although he took pains to make sure no one realized the tales came from his own experience.

The language is irreverent, direct, sometimes crude. It is offered by a character called “Spike,” clearly modeled on the author. For years, Dapping tried to get that work into print. Except for a sampling in the New York Evening Post—a result of direct intervention by Osborne—Dapping never found a publisher for his narratives. Today, they are seen as a precious account of gang life from a young eyewitness.

Yet Register says no editor saw that value in Dapping’s work, more than a century ago. 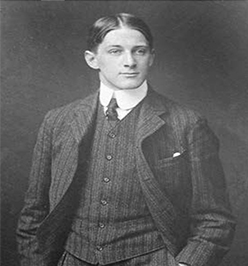 “I think it was a book about children that really wasn’t written for children, that didn’t fit into any particular genre,” Register says. “It was suitable for adults but didn’t fit the [morality of the] times: It didn’t wag a finger at the boys. It celebrated their resourcefulness, their ability to hoodwink adults.”

Dapping finally gave up on publishing the book. Through Osborne, he found a job with the Auburn newspaper, where he won a Pulitzer and built a long career. Register suspects that Dapping, as he grew older, had no wish to share or reveal the grittier elements of his life.

When he died, his papers, like Osborne’s, were donated to Special Collections at the University. As Register read through the Osborne-Dapping correspondence, he realized an unusually accurate account of gang life in New York City had once been written, rejected, wrongfully ignored, and in all probability tossed away in defeat.

In 2012, Register returned to the sixth floor at Bird Library, home to Special Collections, with his attention turned entirely toward Dapping. Still, he assumed the long-forgotten manuscript had been destroyed.

“I deliberately delayed looking for it because I didn’t want to get my hopes up,” Register says.

Finally, he asked the staff to bring out the boxes. Register began opening them, bracing for disappointment.

In an instant that he’ll never forget, there were the sketches—still intact and fragile to the touch, fulfilling his best hopes.

Suzanne Guiod, a senior editor there, quickly saw the potential.

Dapping’s manuscript, Guiod says, “is a rare primary document from the Reform Era, one that could be taught alongside classics like ‘Maggie: A Girl of the Streets.’ … It makes a significant and wholly unique contribution to New York State and New York City Progressive-Era history and writing.”

It took a few more years for the book to come together. Register needed to assemble the full manuscript and write a detailed introduction. He stuck with Dapping’s title for the narrative; Register realized the power of calling the book “The Muckers,” a reference to the filth and dung scattered around the streets of New York.

The book was published this autumn. Register plans on returning to the University for a signing at some point in the coming months. He also intends to complete another book on the collective journey of the four city boys whose narratives captured his attention, at Bird Library.

As for “The Muckers,” the joy of finding the manuscript remains deeply satisfying. During the years of research, Register developed a kind of spiritual loyalty to the narrator, this indomitable child of poverty in New York City.

Dapping faced suffocating obstacles as a boy, survived them and died believing that no one would ever know the full triumph of his story. To Register, this new book is more than history. For forgotten children of the street, it serves as testament and validation.

“It feels very good,” Register said, “to bring ‘The Muckers’ into the light.”