Public safety personnel from all over Central New York met for a unique training seminar at Syracuse University to tackle the issues of unconscious bias. 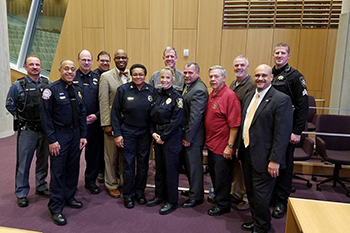 Marks, an associate professor of psychology at Morehouse College and director of the Program for Research on Black Male Achievement, has been working closely with the White House and serves on President Obama’s board of advisors for the White House Initiative on Educational Excellence for African Americans.

Marks was hosted by the University’s Division of Campus Safety and Emergency Services. The training was open to all officers and supervisors within the Department of Public Safety, as well as Central New York law enforcement agencies.

“As part of a continuing conversation and an effort for continuous organizational improvement, the members of the Department of Public Safety had an opportunity to self-reflect and work on self-improvement. They were joined by more than 300 law enforcement officials from around the region who will bring this new knowledge back to their organizations with a goal of improving relationships with the communities that they serve,” says Tony Callisto, senior vice president and chief law enforcement officer at the University.

Marks said that he opens up these training sessions with the acknowledgement that everybody carries biases within them, whether it is based on race, gender, class or nationality.

Bias is defined as a prejudice in favor of or against person or group that is considered to be unfair. Unconscious biases (also known as implicit biases) are social stereotypes about certain groups of people that are formed without direct awareness.

“Approaching the subject from many different angles helps bring down defensiveness.” said Marks. “What I want everyone to know is that we all have biases but we can all manage those biases .”

Marks offered many examples of unconscious biases, including how both men and women have been shown to prefer male bosses over female bosses, even though evidence demonstrates both genders are capable of leadership roles.

“In confronting your biases, you need to question your assumptions and look at the evidence around you,” said Marks. “I hope when people leave they better understand unconscious bias and are willing to consider their own biases.”

Marks also encouraged participants to go online to Project Implicit, a nonprofit organization and international collaboration between researchers to educate the public about hidden biases through a series of online quizzes.

“Dr. Marks offered participants an opportunity to learn about how subtle implicit bias can be, how it can impact attitudes and action, and how each of us has been exposed to such bias at a subconscious level throughout our lives. We learned that acknowledging implicit bias is a first step toward managing it in a way that can reduce the impact on others,” says Callisto.

Callisto says this was the first of many more opportunities for the division of public safety.

“Next steps include more training, more community engagement and an ongoing self evaluation of the President’s Task Force on 21st Century Policing recommendations compared with current DPS practices, with an intent to improve performance and service,” says Callisto.