David MacDonald, an internationally renowned artist and professor emeritus of ceramics in the College of Visual and Performing Arts, is profiled on the American Public Television program “A Craftsman’s Legacy.” 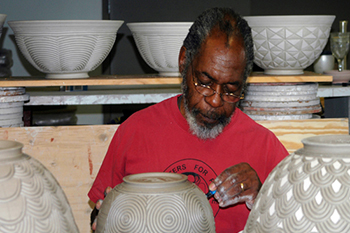 In the first episode of the season, master ceramist MacDonald talks about his development as a craftsman and artist from his early days, when he transferred his interest from an athletic scholarship to the physicality of pottery making. He also describes the transformation of his ceramic work from political art in the beginning to a celebration of this African heritage and other cultures, and his hopes for his artistic legacy.

“I consider myself very fortunate and blessed that at a relatively young age I found something that I enjoy. I really feel it has been a privilege to be associated with Syracuse University and the advantages of being in an academic environment, where I could experiment with interesting ideas,” says MacDonald.

In MacDonald’s appearance on the program, he teaches host Eric Gorges how to use a pottery wheel to throw a bowl, then carve and glaze it. For the Syracuse region, this episode broadcasts at 3 p.m. on Saturday, Nov. 26, on WCNY. Those outside of Syracuse should check their local listings.  A preview of the episode can be viewed here.

“In a disposable world, craftsmanship is a lasting and loving legacy to future generations,” says “A Craftsman’s Legacy” host and producer Gorges. “We’ve lost our ability to appreciate the quality and the fact that someone put part of themselves into that creation. As we introduce our viewers to the amazing work of these men and women, I hope we will also inspire them to learn to make something themselves.”

In 1971, MacDonald joined the faculty at the University. During the late 1970s and early 1980s, MacDonald’s work received most of its creative inspiration from his investigation of his African heritage. Looking at a variety of design sources in the vast creative tradition of the African continent, MacDonald draws much of his inspiration from the myriad examples of surface decoration that manifests itself in the many ethnic groups of sub-Saharan Africa, such as pottery decoration, textiles, body decoration and architectural decoration. MacDonald’s work spans the complete spectrum of ceramic forms of a utilitarian nature.

His work is in the permanent collections of the Studio Museum in Harlem, Montclair Art Museum and the Everson Museum of Art.