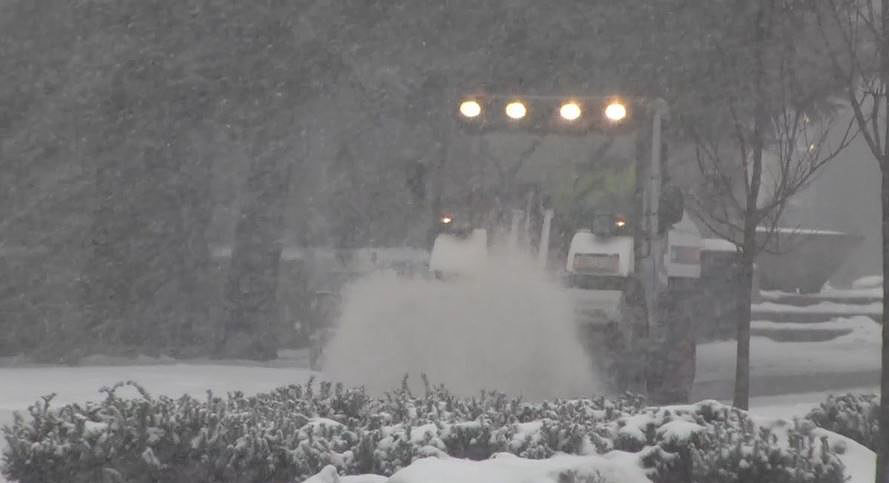 Syracuse University employees are responsible for clearing snow and ice from more than 30 miles of roads and sidewalks.

You can be certain a forecast calling for snow has the attention of Jim Miller. Miller oversees snow removal on campus. It’s no small task, considering the University campus is made up of 14 miles of roads, 23 miles of sidewalks, 3,000 stairs, 680 entrances/stoops, 8,700 parking spots and 120 curb cuts.

“It’s our job to keep our roads and walkways as clear as possible,” according to Miller. “We have crews that handle the parking lots, crews to handle the sidewalks and crews to handle the roadways.” During the winter season, crews are scheduled for shifts between 4 a.m. and midnight. If snow is forecast to start overnight, Miller makes sure staff are in and working to make sure campus roads are cleared by the time commuters arrive on campus and classes begin.

Miller explains it takes his workers roughly three hours to cover their assigned routes. This is important to note, since during periods of heavy snow it may appear that some areas have not been cleared. Miller says it’s likely that his crews are just finishing up their route, before circling back to start again. If you’ve shoveled your driveway during a heavy snowstorm, you’ve experienced this.

Miller has also added some new tools to the snow removal arsenal, in the form of a brine liquid that will be used to pre-treat roads and sidewalks. “It’s the same liquid being used by many municipalities in their snow removal efforts. The solution inhibits ice and snow buildup. “It’s environmentally safe as well,” adds Miller.

Miller and his crews are always interested in hearing about problem spots, including areas where there are chronic snow removal issues or accessibility ramps where the snow removal path may be too narrow.

“At the end of the day, we want our campus community to know that there is a team of workers who stand ready to clear away whatever mother nature sends our way,” says Miller.