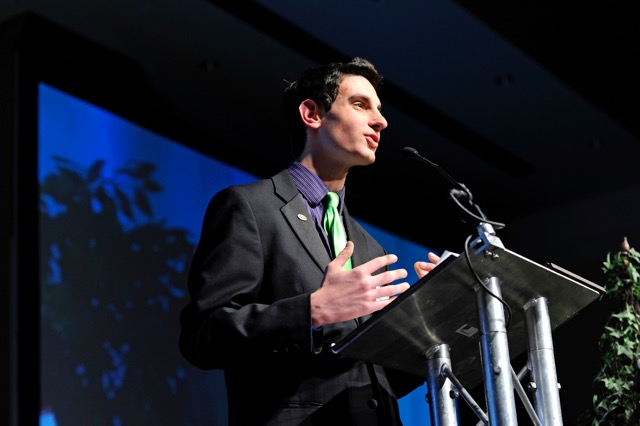 Justin Bachman, a sophomore in the Newhouse School, developed a presentation, Living Loud, in which he speaks around the country to students about tolerance and acceptance.

Justin Bachman ’19 has never forgotten the day that changed his life and started him on his mission.

Bachman, who has Tourette Syndrome, was disqualified from an eighth-grade cross country meet because of the involuntary noises he makes due to the neurological condition.

He also knew he didn’t want others to go through the same situation, and so for him the best way to counter what had happened was to start educating others about differences.

“Not only differences that I had but the fact that everybody has something that makes them different,” says Bachman, a broadcast and digital journalism student in the S.I. Newhouse School of Public Communications. “Speaking and sharing about differences was the best way I knew I could do it.”

Out of his revelation came “Living Loud,” a presentation on tolerance and acceptance that he has shared with middle and high school students and college students at 150 schools in 16 states over the past six years. 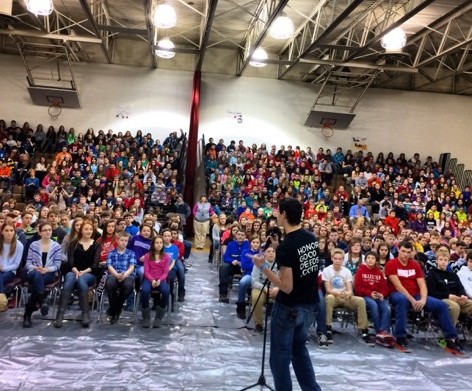 Justin Bachman has brought his message of tolerance and acceptance to over 150 schools.

“Living Loud means being proud of who you are and being able to show it off to everyone around you,” Bachman says.

A member of the Chancellor’s Workgroup on Diversity and Inclusion, he was recently a featured speaker at a National Disability Employment Awareness Month event in October at the Syracuse Veterans Administration Medical Center.

Among his numerous awards for his presentations, Bachman, of Cleveland, Ohio, received the President’s Volunteer Service Award from President Barack Obama and the Council on Service and Civic Participation twice while in high school.

“I’m very thankful that I’ve never been afraid to get up in front of a crowd. I really do live as loud as I possibly can,” Bachman says. “There’s nothing I hold back, and so getting up on a stage, while not the easiest thing to do simply because a speech is a lot of work with a lot of preparation, it was the best medium for me.”

Bachman shares more of his message to Living Loud and what he hopes people take away from his message.

Q: What are the key themes of Living Loud?

A: Living loud, at its heart, is about tolerance and acceptance of everyone else around you, but more importantly of yourself—of being able to see those things that make you different from everyone else. It’s not a bad thing but something that makes you who you really are and makes you amazing.

Q: How do you describe an “upstander”?

A: Being an upstander is really the central story of Living Loud. It’s the story of the cross country meet, and that’s a key point that I want people to take away. At that cross country meet, my teammates were able to stand up and say something to those referees that were giving me a hard time. My teammates knew about my differences. It’s never easy to stand up to a person in authority, especially in eighth grade. But it was a day that changed my life forever and it was able to happen because my teammates stood up.

Standing up showed me that I could. I hope that everyone who leaves my presentation leaves knowing they can be an upstander, no matter what they are standing up for, as long as they truly believe in their heart it’s right.

Q: What do you hope resonates with people after hearing your Living Loud presentation?

A: Too often we see these things that make us different as negative things, that make us less. My main goal, if I have accomplished anything, is that people walk away not necessarily with their minds changed—because I know 45 minutes is not going to change an entire mindset—but I want them to at least start thinking about it a different way. My goal is really empowerment. 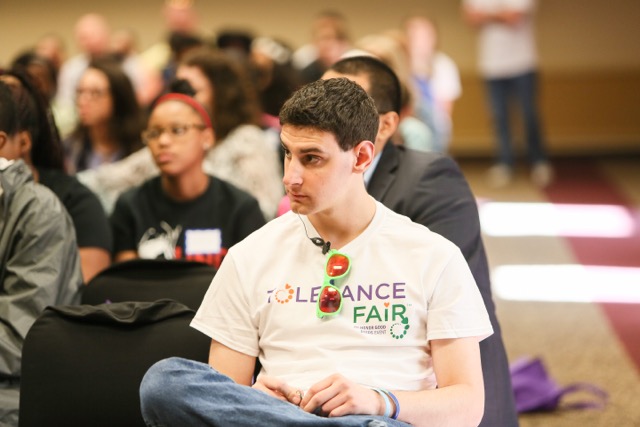 Justin Bachman wants others to be proud of their differences and spreads a message of tolerance in his Living Loud presentations.

Q: What did it mean to you to be awarded the President’s Volunteer Service Award?

A: I was very humbled. You don’t do it for the recognition, but it is very nice to know that there are people out there who appreciate the good works you do. It’s a nice bonus on top.

Q: Why did you decide to come to Syracuse?

A: I want to be a news anchor. I want to be someone in a community who can talk about what is going on and hopefully unite the community together for positive change. I saw Newhouse and broadcast journalism as the best way for me to do that.

Q: How do you Live Loud?

A: I guess it’s more of a lead by example. I really do not hold back. I’m a very involved person. I’m a member of Orange Seeds [an organization that assists first-year students in becoming familiar with campus and encourages them to be active] and a resident advisor in Lawrinson Hall. I love to help people and be able to spread my message by just being who I am—and being proud of it. I hope other people follow my example.

Q: Do you take after your parents? They must be proud.

A: They are the reason I am who I am.