‘A Moral Obligation to Stand with the People’

Ahmed Abdel Meguid was out with friends in Istanbul on July 15 when members of the Turkish military initiated a coup attempt. Abdel Meguid, an assistant professor in the College of Arts and Sciences’ Department of Religion, spent the summer researching classical Islamic logic and philosophy through a grant from the International Institute of Islamic Thought. That warm summer night, military jets flew low, gunshots rang out and tanker trucks rolled in the streets. 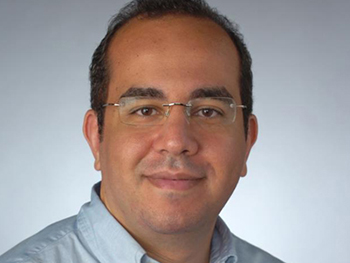 Abdel Meguid and his friends were learning about the coup attempt via social media as the world watched the Turkish army take over a television station to declare martial law and announce a curfew. Thousands of people—even those who oppose the autocratic policies of President Recep Tayyip Erdogan—headed to the streets in defiance of a military takeover.

Despite the chaos and danger, Abdel Meguid stayed put, compelled to stand as a witness to history.

“I wanted to be part of that moment,” he says. “I felt a moral and religious obligation to stand there with people.”

By the next day, Erdogan had reasserted control and arrested thousands of military personnel. More than 300 people were killed and more than 2,100 were injured.

“I was lucky,” Abdel Meguid says. “I saw people shot. People died in the streets defending this democratically elected president. You can criticize Erdogan’s actions after the coup, but the Parliament was bombed by its own military.”

It’s not the first time Abdel Meguid, who is from Egypt, found himself in the middle of a Middle East coup. He was in Cairo on July 3, 2013, when Egyptian army General Abdel Fattah el-Sisi led a coalition to remove President Mohamed Morsi from power.

“The military in Turkey were like the thugs of (former President Hosni) Mubarak’s regime, who went above buildings and shot into Tahrir Square,” he says. “The Turkish people were very courageous and determined and dignified in standing their ground.”

Western media failed to accurately portray this summer’s coup attempt, Abdel Meguid says. “The main sentiment among almost all Turkish people was the extreme hypocrisy of the American media coverage,” he explains. “CNN claimed the coup was successful. That was complete nonsense. The arrogant Western media did not apologize and Secretary of State John Kerry was slow to condemn it as a coup.”

The response to the coup attempt “is hypocritical and does not help the image of the United States in the Middle East,” he says. “The Turkish people feel America is against any Islamically oriented government, even if it is democratically elected.”

Although many journalists and intellectuals remain imprisoned, life in Turkey is returning to normal. But media outlets continue to exaggerate the danger, harming the economy. “Istanbul is safe to visit,” he says.

Abdel Meguid has taught at Syracuse since 2011. His research draws on Islamic and German philosophy. He has published and has forthcoming articles in the European Journal of Political Theory, Oxford Journal of Islamic Studies and Philological Encounters. He is currently working on a book about modal logic in classical and early to late modern Sunni theology and philosophy.

About 65 students, most of whom are not Muslim, are taking “Discovering Islam,” and current events provide frequent class discussion topics. “I try to show students what philosophy says in theory has an application in practice,” he says. “When we talk about the coups in Egypt and Turkey, I talk about tyranny in Plato’s ‘Republic.’”

While he finds students generally eager to learn about Islam, he worries that comments by now-President-elect Donald Trump stir anti-Islamic sentiment. “The ignorance in his discourse is stunning,” Abdel Meguid says. “What he says might incite hate. The question is not Trump himself, but if it reflects the real view of the American population. Even if people are open, there is a lack of knowledge.”

In his view, the same ignorance infects media coverage and U.S. foreign policy. “People are not taking into consideration Islamic thought and philosophy as a reconstruction of historic authority,” he says. “They see it as the white man’s burden, a backwards tradition to be fixed.”

Abdel Meguid tries to maintain an optimistic outlook, despite frustration and disappointment at the lack of knowledge about his rich culture. “I know what is good about the American academic tradition, with universities and disciplines working together,” he says. “America has a great potential for relating to different cultures. It’s time for the great academic tradition to lead America.”