Life Trustee Daniel A. D’Aniello ’68 to Serve as Next Co-Chair of the IVMF Advisory Board

A Syracuse University Life Trustee will assume an important, new role on campus. 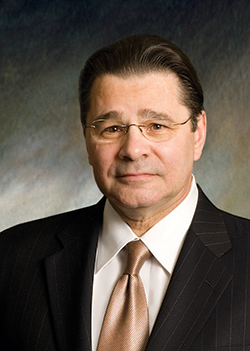 Daniel A. D’Aniello ’68, chair and co-founder of The Carlyle Group, one of the world’s largest and most successful investment firms, is the new co-chair of the Institute of Veterans and Military Families (IVMF) Advisory Board. He shares the position with Matt Zames, chief operating officer of JPMorgan Chase & Co. D’Aniello succeeds Steven Barnes, chair of the University’s Board of Trustees and one of the IVMF Advisory Board’s founding co-chairs.

In September, D’Aniello was awarded the U.S. Navy Memorial Foundation’s Lone Sailor Award. He received the award for drawing upon his Sea Service experience to achieve success in his personal and professional life, while exemplifying the core values of honor, courage and commitment.

“Dan’s service to our country and to Syracuse University uniquely positions him to positively impact IVMF and all of those served by the Institute,” says Chancellor Kent Syverud. “Dan understands what it is like to run a successful organization with a keen eye on results. I look forward to seeing great things happen under Dan and Matt’s leadership.”

“Dan is a true advocate for the University and for our nation’s service members, veterans and their families,” says J. Michael Haynie, vice chancellor for strategic initiatives and innovation. “As a veteran and entrepreneur, he has tremendous insight into the marketplace and how veterans bring in-demand skills to companies. I am honored to have him as part of the IVMF leadership team.”

“I am humbled and honored to serve as co-chair of the IVMF Advisory Board,” says D’Aniello. “The Navy instilled values in me that are part of my business today—integrity, professionalism and trust. As a veteran myself, I understand that the mission of the institute is critical to providing needed programs and services to the men and women who have worn the uniform of this country. I have watched the growth of the IVMF over the past five years and I am excited to serve during this time of continued growth and opportunity.”

D’Aniello hopes to build on the success of his predecessor. Under Barnes’ leadership, the advisory board helped grow the IVMF from an operation of four employees to one with more than 70 team members across eight states. Today, the IVMF annually serves thousands of U.S. service members, veterans and their families around the globe.

“The IVMF has benefited tremendously from Steve’s leadership,” says Chancellor Syverud. “I am grateful for his vision and his early and ongoing support of the IVMF. Syracuse University is fortunate to have Steve’s continued leadership of the University’s Board of Trustees.”

Prior to forming Carlyle in 1987, D’Aniello was vice president for finance and development at Marriott Corp., where he oversaw the valuation of all major mergers, acquisitions, divestitures, debt and equity offerings and project financings. Before that, he was a financial officer at PepsiCo and Trans World Airlines.

In addition to serving on Syracuse’s Board of Trustees, D’Aniello is a member of the Chancellor’s Council and the Martin J. Whitman School of Management Advisory Board. He is a longtime supporter of the University, having contributed generously to scholarship funds, student experiential learning, the Entrepreneurship Bootcamp for Veterans with Disabilities, the D’Aniello Lecture Series, the IVMF and the Whitman School.

D’Aniello is a member of the Council for the United States and Italy, the John Templeton Foundation, the Lumen Institute and the U.S.-China CEO and Former Senior Officials’ Dialogue of the U.S. Chamber of Commerce. He is vice chair of the board of trustees of the American Enterprise Institute for Public Research and chair of the Wolf Trap Foundation for the Performing Arts. He also has overseen various public and private companies in which Carlyle has or has had significant investment interests.