Adam Westervelt couldn’t believe how fortunate he was. In fact, as he looked around a classroom full of students, he couldn’t even fathom that he was in the African nation of Senegal. 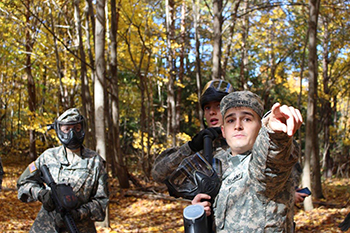 Adam Westervelt during an ROTC exercise

Westervelt, as a member of the Reserve Officer Training Corps (ROTC), was participating in a opportunity that was equal parts training and service over the summer of 2016. The trip was the latest opportunity in the Syracuse University junior’s time as an ROTC cadet.

“I’m learning to become a soldier, but I’m also becoming a leader,” Westervelt says. “For me, this program at SU has opened up doors for me that I never even thought were possible.”

Westervelt, 20, hails from North Redding, Massachusetts, and is with two majors: information management and technology in the School of Information Studies and Economics in the Maxwell School of Citizenship and Public Affairs. Westervelt decided upon Syracuse in part because of the ROTC program on campus, in addition to the academics and “beautiful” campus.

Upon graduation, Westervelt will be commissioned as a second lieutenant in the U.S. Army. Despite plans to enter the National Guard component, the option to enter as an active duty solder also remains for Westervelt to take if he changes his mind.

“I wanted to be in the military since I was a child, but I knew I wanted to go to college, so ROTC gave me the perfect opportunity to do both,” Westervelt says. “I get the best of both worlds and I’ll go into the army. I got to go to college and I’m really doing it.”

The service aspect of entering the armed forces is what really propelled Westervelt to sign up for ROTC. He simply wanted to give back. One of his grandfathers was in the U.S. Marine Corps, but he’s the only one in his or his parents’ generation, to want to serve his country.

The Syracuse Army ROTC, Air Force ROTC at Syracuse University, and the Syracuse University Office of Veteran and Military Affairs kicked off Veterans Day with a Fun Run and Walk at 6:30 a.m. to help begin the remembrance of those who have served. For Westervelt, Veterans’ Day means a lot—especially as someone involved with the armed forces.

“I’ve even served with some veterans here on campus in the ROTC program, people who have served overseas and are much older than me,” Westervelt says. “It’s not about us—that day is about them.”

With older friends in high school already enrolled in ROTC programs, he knew what to expect coming in to SU. The reality of early morning physical training (PT) sessions was an expectation, not a surprise. Each Friday, he participates in “labs” where he learns the ins and outs of being an officer through hands-on activities and simulations.

Although he’s finished with the hour-long PT sessions before most students’ alarms go off, Westervelt finds that’s when he is most productive.

“I take a lot of naps,” Westervelt says, laughing. “I’ve gotten really good at sleeping when I need to so that I can still be that ‘regular’ college student.”