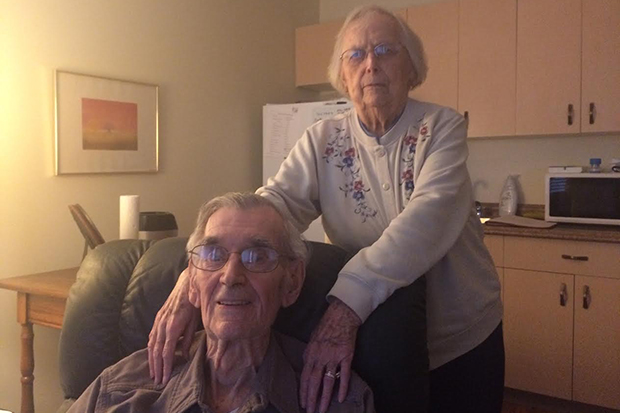 Fred Talbot wrote the poem seven years ago. A friend of his in the DeWitt Rotary Club, Mel Rubenstein, was working on a book called “The Peacetime Draft During the Cold War.” He asked Talbot, a World War II veteran, to read through it.

The manuscript triggered something passionate in Fred, who was about to turn 90. When he handed the pages back to Rubenstein, he also gave him a short poem the work inspired.

Fred called it “Our Sworn Duty.” Rubenstein loved it. He put it in his book, where it was embraced by readers. Fred never expected his little poem to generate such emotion that in 2013 it would end up on a main wall of the Syracuse Veterans Affairs Medical Center, on a plaque presented by the DeWitt Rotary.

On Rubenstein’s suggestion, “Our Sworn Duty” will also be part of today’s Syracuse University Veterans Day remembrance ceremonies, at 11 a.m. at Hendricks Chapel. These brief lines will be read by Jordan Robinson, a Marine Corps veteran and a graduate student in the Newhouse School of Public Communications:

Whether the sky is dark or gloomy gray

Or blue and full of warming sun

The eagle soars not only for prey

But to protect its helpless young

As faithful soldiers with steady nerve

We stand ready to shield our own

Our sworn duty is to protect and serve

Wherever seeds of hate are sown
“There’s something about it,” Rubenstein said. “Every time you read it, you think about every word he wrote. It’s taken on a life of its own.”

Rubenstein ’57 asked a year ago if University organizers would include the poem in the Veterans Day ceremonies. They embraced the idea. Robinson said she learned of “Sworn Duty” from Ron Novack, a retired Army colonel and executive director of the Syracuse University Office of Veteran & Military Affairs.

“The poem inspires me,” Robinson wrote in an email, “because I feel that it resonates with all who have taken the oath to defend our nation.”

Her response carries deep meaning for Talbot, 97, a native of Beacon, N.Y., and a 1949 graduate of the School of Architecture. When Chancellor William Pearson Tolley opened the doors to veterans in the years after World War II, Talbot used the GI Bill to take advantage of the opportunity. He and his wife, Jane, moved into an attic flat on Redfield Place, within walking distance of campus.

Fred recalled showing up for class, at 27, as a combat veteran. He encountered some teenagers, students who weren’t long out of high school. They asked him if he had a girlfriend. He told them he’d been married since 1943.

They were stunned. Fred went home that day and told Jane: “I think I’m back in kindergarten.”

He shared that story this week from Maple Downs, the senior living facility in Fayetteville where he and Jane have an apartment. He is 97. She is 95. Their longevity is astounding to them both, but they never allow themselves to get lost in the past. Fred embraced the digital world. Until a few years ago, the couple stayed busy in the community.

That ended when Fred began struggling with a progressive swallowing disorder. He will not be able to attend today’s ceremonies with Chancellor Kent Syverud and other university dignitaries. But he said it is gratifying to know Robinson will read his poem, and he is pleased by the University’s appreciation for the veteran experience.

“When you’re young, you can take a lot,” Fred said. “But when you get older, and you’re in a different circumstance. …”

You remember, vividly, everything that you survived.

Maybe, he said, you remember running across a field, totally exposed to German guns, fully expecting to be killed as the soil was torn to bits. You threw yourself into a ditch. You waited, for what felt like forever. In what seemed to be a miracle, the shooting died away. You went on.

Maybe you remember coming upon on an American truck stopped on a mountain road, how you stuck your head through an opening in the back, how you realized it was filled with the bodies of young soldiers, just like you.

Maybe you remember the starving farmer whose pet dog killed one of his sheep, and how the desperate farmer said to you: “Please, you have to shoot my dog.” It was a good dog, a loyal dog. You told the farmer you didn’t want to do it, but he begged you.

You took the dog out back and raised your gun and it was looking at you, and now you are 97 and when you try to sleep, those eyes are still wide open.

There was no choice. You had to pull the trigger.

He grew up near the Hudson River. He was the son of a plumber, a guy who ran a Prohibition “speakeasy,” an underground drinking establishment. Jane remembers Fred’s father as “a gentleman,” an immigrant from Great Britain who never swore, who was always dignified.

The couple met at the Rochester Institute of Technology, before Fred was drafted. They were in two different groups of students, young men and women who had a chance encounter at a street corner. Amid the laughter and the stories, Fred and Jane caught each other’s eye.

That was pretty much it.

In the way magic happens, they both knew.

Jane remembers the day Fred’s train pulled away, as he left for the war. She remembers how she’d write to him every day, and her fear during the long periods when she’d hear nothing at all. Fred was injured in 1945, as the Americans pushed into Germany. Once the war ended, he was sent home on a hospital ship. The couple was reunited during a snowstorm, at a hospital in Utica.

For the 71 years since that moment, they have rarely been apart.

Fred became an architect. He designed the house they lived in for 65 years on Vincent Street, not far from campus, where they raised two children. Fred had many passions: He painted. He made jewelry. He wrote books about his life, or his experience with the 14th Armored Division, during the war. When his friends wanted to reach him, they’d send him an email or contact him on Facebook.

It was only in the last year or two, as his throat problems grew worse, that it became all but impossible for him to move around the city.

Although he and Jane cannot be at the ceremony today, they are glad “Sworn Duty” will be a part of the celebration. “It’s important that our young people think about it, about everything they went through over there,” Jane said of Fred and his fellow veterans.

She and Fred used to get together routinely with five other couples, all close friends. The others  are all gone. It is just Fred and Jane. They could lose themselves in an avalanche of wistfulness. Instead, they see themselves as lucky.

What a blessing: Every day, the first face they both see is a best friend.

“There’s no particular joy in growing old,” Fred said. “The joy is doing it with someone you love.”