In summer 2008, Cedric Bolton, student engagement coordinator in the Office of Multicultural Affairs, organized an open mic night as part of the Summer Start program and noticed something he hadn’t seen before, “All of the students were utilizing their computers. When I usually go to open mics people have notebooks, keeping it old school, but the landscape was changing.” 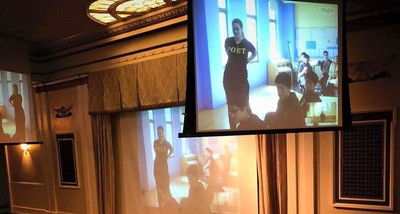 Janel Sullivan ’12 Skypes into an Ayo Technology session from China.

Drawing on this changing landscape, in fall 2009 the Ayo Technology program officially launched, and the main way students could perform at the mic was with their phone or a laptop. If students didn’t have either they could still perform, but the focus was on how technology could be used as part of an open mic.

The idea to blend digital technology further into Ayo Technology started with a chance meeting in summer 2010 in Madison, Wisconsin. Anna Pirsch, then a student at the University of Minnesota and vice president of Voices Merging, tracked down Bolton at a conference to let him know how Voices Merging, a program he had created during his time at the University of Minnesota, had been an integral part of her undergraduate career. This started a process that would lead to Ayo Technology’s first Skype engagement.

Working with Susan Watts, a project manager on campus, Bolton made sure that the first Skype engagement between Voices Merging in Minneapolis and Ayo Technology in Syracuse was one that students would remember. The first engagement drew over 200 students. For Bolton, the engagement was important. “The event opened up a space for students to engage with each other, to find out what it’s like to be in Minnesota, to be in Syracuse, what it’s like to be a student artist,” he says. “It’s a place to find support for what you like doing through poetry.”

Janel Sullivan ’12 participated in the first Skype engagement and eventually co-hosted an engagement in her senior year.

“Ayo Technology has always been a highlight for me of the Verbal Blend Open Mic Series,” says Sullivan. “It was fun to see other students who love performing as much as I do and hear new voices. One of my proudest moments was being able to host Ayo Technology when I was a senior at SU.”

When Sullivan moved to Shanghai to teach, Ayo Technology was reborn. Now in its sixth year, the Skype engagement has gone global with the Asylum Slam Team of Wan Yuan U.S. High School.

“When I started my job in Shanghai I knew I wanted to start a poetry slam team at my school, and meeting with these students is truly a highlight of my week,” says Sullivan. “The school’s motto is ‘East Meets West’ so what better way to embody this than collaborating with a U.S. university?  As a teacher it has been amazing to see my students interacting with Verbal Blend.”

Sullivan sees the program as a teaching opportunity as well. The students have a chance to practice their English language arts, which Sullivan teaches, but also engage with another part of the world.

“This has become just as much a cultural experience as it is an artistic exchange, and I hope this is an event we can partake in every year,” she says.

Similarly, the experience engages SU students by providing a platform to hear other voices and share their experiences. The next Ayo Technology Skype engagement, co-sponsored by the Slutzker Center for International Services, is Wednesday, Nov. 16, at 7:15 p.m. in Watson Theater.  If you have questions about Ayo Technology and how to participate, email Bolton.