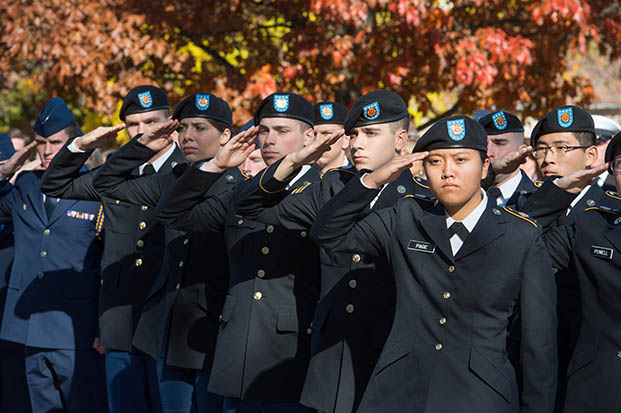 On Friday, Nov. 11, the United States celebrates Veterans Day, a federal holiday honoring the men and women who have worn the uniform of this nation. Syracuse University, recently named the No. 1 private school in the country in Military Times’ Best for Vets 2017 ranking, has several events planned to honor the nation’s veterans. They include:

Veterans Day 5K Fun Run and Walk
Einhorn Family Walk
6:30 a.m.
The run/walk begins in front of the Schine Student Center at 6:30 a.m. Registrations will be accepted that morning.

Veterans Day Ceremony
Hendricks Chapel
11 a.m.
The University community will gather to honor those who have given selfless service to the United States. Richard Jones G’95, L’95, executive vice president, general tax counsel and chief veteran officer for CBS Corp., will be the keynote speaker. Jones is an Army veteran and board member for the Institute for Veterans and Military Families (IVMF) at Syracuse University.

Military Appreciation Day
Carrier Dome
The Orange Women’s Basketball team will open its season against Rhode Island at 3 p.m. Tickets are $5 for all active duty military and veterans.
At halftime, Syracuse University student Andrew Mauch will perform a jump rope routine. Mauch previously competed at the World Jump Rope Championship with the Chapel Hill, N.C.-based Bouncing Bulldogs. American flag keychains will be given away as well.

The Orange Men’s Basketball team will take on Colgate at 7 p.m. Tickets are $10 for all active duty military and veterans. At the game, John Williams, a senior in the School of Information Studies, a U.S. Army veteran and vice president of the University’s Student Veterans Organization, will sing the national anthem. World War II veteran Don Waful ’37, G’39, will be honored as the Hometown Hero.

In addition, the Department of Athletics offers the “Military Pass,” which allows active military members and veterans access to complimentary or discounted tickets for football and men’s and women’s basketball games. Servicemen and women interested in redeeming tickets are asked to register here using their military I.D.

Also, the ’Cuse for the Troops’ ticket campaign is underway. For $20, fans can sponsor a ticket to Saturday’s Syracuse-North Carolina State football game and send a member of the armed forces to the game for free. To sponsor a ticket, click here or call the Carrier Dome Box Office at 888-DOMETIX.