A Broader View of Transnational Feminism

Sheila Ragunathan once gave a presentation at Goethe University in Frankfurt, Germany, about critical theory and the intersectional approach in feminist theory. She described Black women’s challenges in the workplace, but the professor said the example was inappropriate, she recalled. “He basically said there are no Black women in Germany,” Ragunathan says. 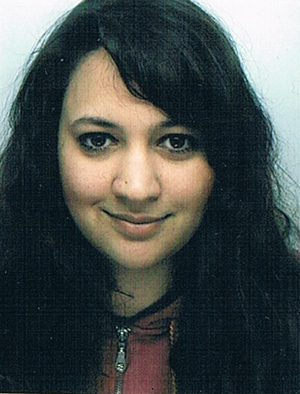 To get a broader view of U.S. antiracist feminist scholarship and its connection to neocolonial power structure, Ragunathan is pursuing a Certificate of Advanced Studies in Women’s and Gender Studies (WGS). A graduate student in sociology at Goethe University, she will return to Germany in January.

“In Germany we don’t talk about race,” Ragunathan says. As a result of German history, the word “race” got eliminated from everyday conversation as well as from scholarship about discrimination in Germany, she explains.

Still, “racism in Germany is a problem, and when it comes to the issue of immigration, increasing attacks on refugee camps show that Germans still want to hold on to a narrow understanding of ‘Germanness,’” she says,

Ragunathan was inspired to come to Syracuse University after meeting Distinguished Professor of WGS and Dean’s Professor of the Humanities Chandra Talpade Mohanty, who spent 10 days last December as the Angela Davis Guest Professor for International Gender and Diversity Studies at GU’s Cornelia Goethe Center. Mohanty is an internationally recognized scholar of postcolonial and transnational feminist theory.

“We talked about the antiracist and feminist movement in Germany and struggles of women of color in and outside academia,” Ragunathan says. “She said it’s important to broaden your view and see yourself in the context of transnational feminism. To analyze your politics, you have to see yourself in comparison to other women.”

Mohanty is pleased Ragunathan chose to use her scholarship from the Hans-Boeckler-Foundation from Germany to pursue a Certificate in Advanced Studies in WGS at Syracuse University. Her experience teaching at Goethe University made it clear that the precise intellectual and theoretical questions that are at the heart of Syracuse’s WGS curriculum were highly sought after by graduate students like Ragunathan.

Mohanty hopes that graduate students from other European universities find their way to Syracuse’s WGS. “Students like Sheila bring a much-valued comparative perspective on racialized gender and the materiality of lived experience in an increasingly multiethnic, multiracial Europe,” she says.

Ragunathan especially enjoys Syracuse’s graduate seminars taught by women of color. “I never experienced that in Germany before, and this has a huge impact on the class atmosphere and the quality of the syllabi,” she says.

She had read work by Mohanty and Linda Carty, associate professor of African American studies and sociology and co-director of the Democratizing Knowledge Collective in the College of Arts and Sciences. “In Germany, women’s and gender studies students know who they are,” she says. “Attending their classes is a unique opportunity not only for me but also for other students at Syracuse University.”

She marvels at an entire department dedicated to women and gender studies, and notes that in the 1980s, U.S. universities began including race in discussions of gender. “In Germany, this is still something we struggle with,” she says. “You have to remind people that intersectional theory is not just something you read about.”

Lots of Germans don’t know their country colonized Africa in places including Cameroon and Namibia, she explains. “The descendants of Namibians who live in Germany are reminded that Germany does not care about their history,” she says.

Ragunathan’s research is partially motivated by her experiences growing up as a mixed race child in Germany: Her mother is a white German and her father is a Tamil from Sri Lanka. On a warm, mid-October day, she sat on the Quad and commented on the ease with which students of different races interact. “In Germany, if you have brown eyes and darker skin, it’s immediate: You’re not from Germany,” she says. “They don’t just question your race. It’s always connected to your nationality.”

But here, she says, “I can talk about it and people don’t question my nationality.”

Ragunathan knows not all the country–or even Syracuse, for that matter—is as welcoming to diversity as what she’s experienced on campus. “It’s kind of a bubble, but it’s an amazing bubble,” she says.