With Election Over, Illuminating Team Looks to the Future 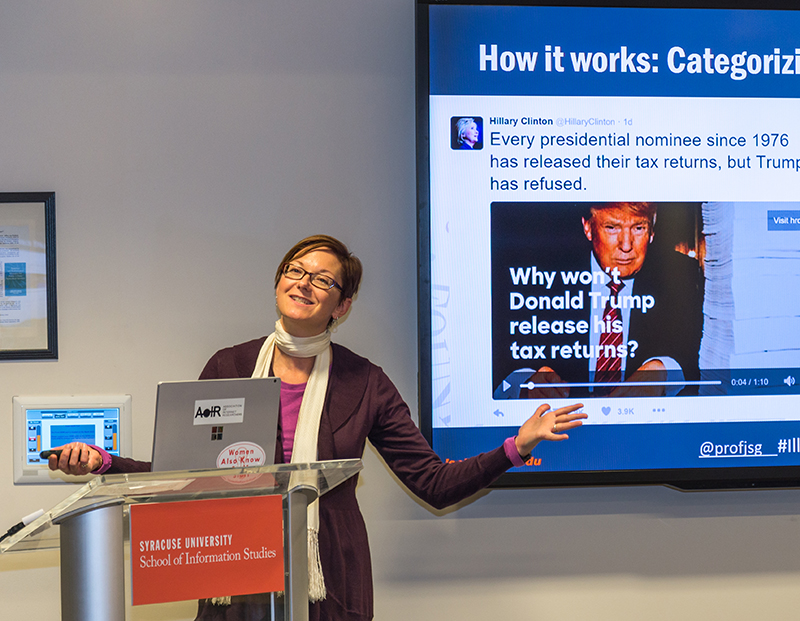 Faculty, staff and students from across Syracuse University gathered in Hinds Hall yesterday to spend part of election night listening to a panel discussion led by School of Information Studies (iSchool) researchers working on the Illuminating 2016 research project.

Headed by Professor Jennifer Stromer-Galley, Illuminating 2016 seeks to understand what indicators across social media can be used to determine support for presidential candidates.

To achieve their objective, iSchool researchers have built a tool that has been collecting Facebook and Twitter messages and images posted by major party presidential candidates.

Tuesday night’s panel discussion examined the data collected by the project researchers, and provided interpretation about what the candidates and their supporters have said across social media since the election cycle kicked off nearly 18 months ago.

With the dust now settling on the 2016 presidential election, Stromer-Galley and her team of researchers, including iSchool faculty members Jeff Hemsley, Bryan Semaan, and Nancy McCracken, are setting their sights on the future of their social media data gathering platform, and figuring out how to apply what they learned to improve their system.

“I think one of the most important things that we learned during this election cycle is that popular public perceptions of what the candidates are doing on social media don’t square with how they’re actually behaving on these platforms,” explained Stromer-Galley. “For instance, our data showed us that Hillary Clinton used attack language more often on social media, but the public perception is that Trump was the one who was attacking more.”

Stromer-Galley believes that the system of social listening and the other measures of engagement that the team is building could eventually allow them to identify shifts of public perception around political candidates.

“It may take us a few more election cycles,” she noted, “we’ll do this again in 2018 and 2020. It’s been harder to be accurate with the public’s discussion, as they’re more complex with how they talk, and it requires a lot more attention and work to get a level of accuracy we’re confident with, as compared to just tracking the candidates.”

Among some of Stromer-Galley’s future plans for the Illuminating system are expanding its capabilities to do processing and computational analysis of images included in social media postings. Right now, the system only evaluates text posts.

“We’ll also be fine tuning our algorithms, tweaking some of the aspects of our machine learning, and we’ll point the tool back at politics, of course,” said Stromer-Galley, “but there are also other areas besides politics, like crisis communications or natural disasters, where we think the tool can be useful as well.

The team is also interested in working with journalists to encourage them to use the website in their research and reporting.

“The journalists we’ve talked with have been interested in the site, and they think it’s useful, but we haven’t yet figured out how to get them to integrate it into their journalism practices,” she explained. “We’re looking for ways that we can better address the needs of journalists with this tool.”

Although the election is over, the Illuminating 2016 website will still continue to display the data collected from the major campaigns over the cycle. To learn more, visit: illuminating.ischool.syr.edu.