The internationally renowned Villiers Quartet, winner of the 2015 Radcliffe Chamber Music Competition and quartet-in-residence at the University of Oxford, United Kingdom, will present a concert on Friday, Nov. 4, at 7:30 p.m. as part of the Baker Artist Series in the College of Visual and Performing Arts’ Rose, Jules R. and Stanford S. Setnor School of Music. 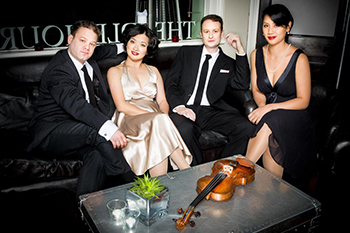 The concert, which is free and open to the public, will take place at University United Methodist Church, 1085 East Genesee St., Syracuse.

Hailed as one of the most charismatic and adventurous quartets of the British chamber music scene (The Strad), the Villiers Quartet has developed an international reputation as exceptional interpreters of English composers, including Elgar, Britten and Delius. Formed in 2011, Villiers has been declared “one of the best young quartets around today” (Jerry Horner, Fine Arts Quartet).

Named after Villiers Street in London’s colorful musical epicenter, the quartet encompasses the grand and iconic spirit of the extraordinary music tradition in London. Its debut CD for Naxos, “The Complete Quartets of Robert Still,” was praised by Gramophone for its “sublimely articulate and concentrated readings” and received five stars in Classical Music Magazine.

Highlights of the quartet’s 2016-17 season include return tours to the U.S., recordings of the Elgar and Delius quartets and the first recording of the complete quartets by English composer Peter Racine Fricker. Learn more at www.villiersquartet.com.

Founded in 2013 with a grant from the Dexter F. & Dorothy H. Baker Foundation, the Baker Artists Program allows the Setnor School to offer a more robust on-campus residency program and provides support for music majors to take master classes and attend workshops and performances in major music cities.

For more information about the concert, contact the Setnor School at 315.443.2191 or visit vpa.syr.edu/calendar/villiers-quartet-baker-artist-series.