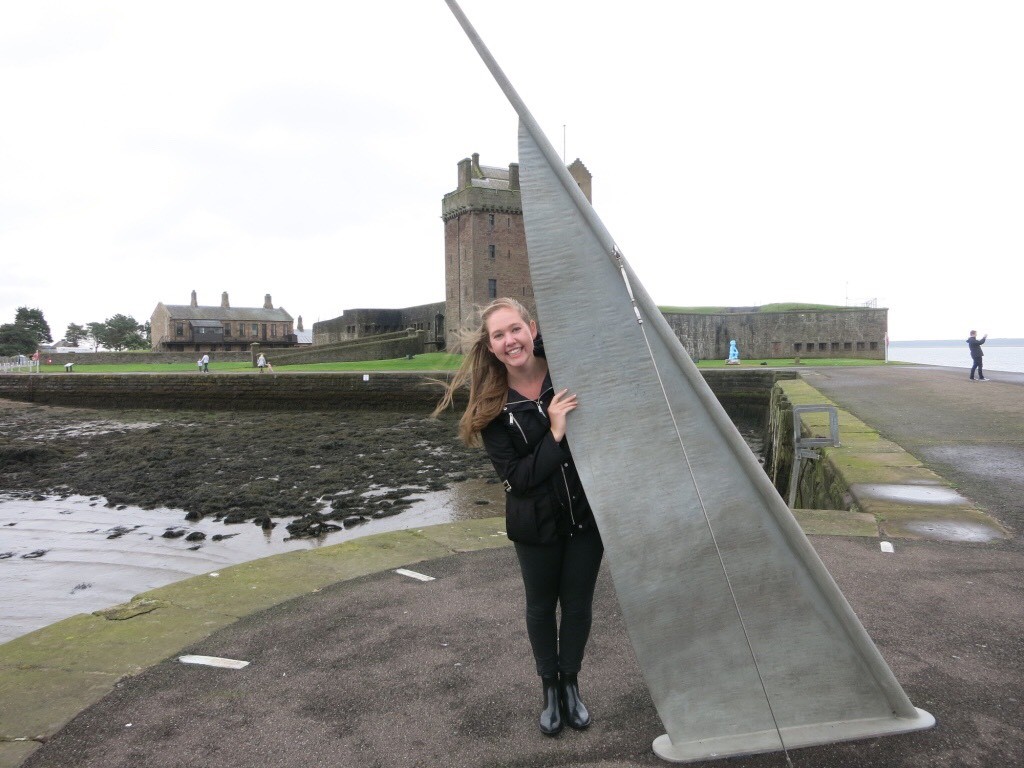 Hannah Butler, a public relations major in the Newhouse School, spent time visiting landmarks, such as Broughty Castle near Dundee, during her time with the Fulbright-Scotland Summer Institute.

Hannah Butler ’19 fell in love with Scotland during her junior year of high school while performing at the Fringe Festival in Edinburgh. When the opportunity arose to go back to Scotland through a Fulbright program, she knew she had to return.

Butler, a public relations major in the S.I. Newhouse School of Public Communications and a member of the Renée Crown University Honors Program, was one of 10 students nationwide to participate in the Fulbright-Scotland Summer Institute 2016. Students explore Scotland’s history and its place in the world through the core themes of the country’s identity, culture and innovation, with lectures, seminars and study visits.

Butler shares some of the highlights of her experience, including a trip to Lockerbie, and how studying abroad has given her new perspective.

Q: Why did you decide to apply for this Fulbright program?

A: The Center for Fellowship and Scholarship Advising reached out to me at the start of second semester and invited me to apply. I was familiar with the Fulbright Commission and their life-changing programs and I noticed that one of the summer institutes was in Scotland. Besides my pre-existing love for Scotland, I applied because the broad program theme, “Identity, Culture and Innovation of Scotland,” would give me an opportunity to learn a little bit about a lot of different topics. The thought of such contrasting curriculum, such as visiting a dissection lab or touring the house of Sir Walter Scott, excited me and I knew that was exactly what this institute with its broad theme would provide. Finally, the Lockerbie connection here at Syracuse University and the opportunity to experience the Lockerbie Garden of Remembrance and the rest of the Pan Am 103 memorial was a chance I could not pass up. 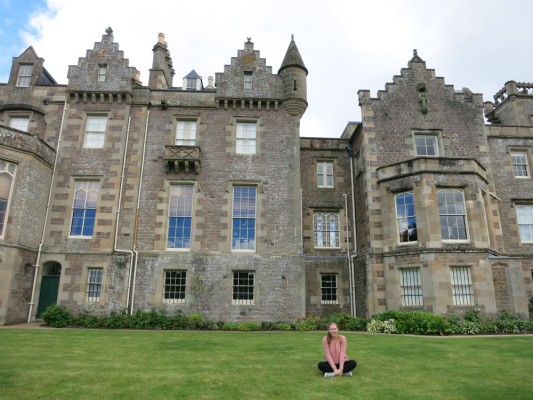 As part of the Fulbright-Scotland program, Hannah Butler explored the home of Sir Walter Scott.

Q: What were some of the components of the program? What were you learning about and visiting as part of the experience?

A: The program was split between the universities of Dundee and Strathclyde, with several program-sponsored days in Edinburgh as well. A typical day consisted of a morning class or two followed by an immersive cultural experience. Our classes ranged from “Comics: The Scottish Connection” to “William Wallace: From Braveheart to Brave” and everything in between. From science lectures to discussions on law, I definitely achieved my goal of a wide range of learning. 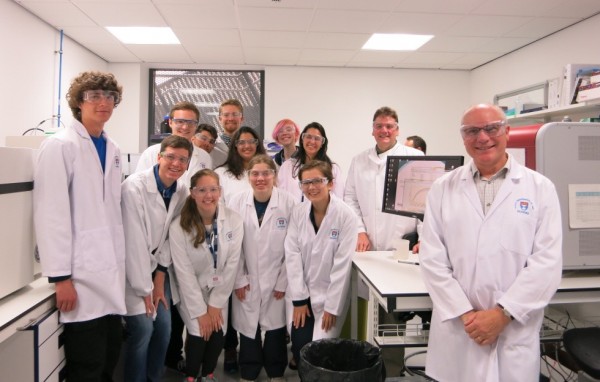 Students with the Fulbright-Scotland Institute, including Hannah Butler, visited the University of Dundee Drug Discovery Lab.

But as fun as the lectures were, the immersive cultural experiences were the best part. From abbey tours to wineries to private archive exploration, I learned that Scotland was far more than just castles and the Loch Ness Monster, although I visited those as well.

Q: What was the experience like at the Lockerbie Memorial?

A: My time at the Lockerbie Memorial was truly an experience I can’t put into words. Even though it was short—I only had about four hours on a Friday afternoon to make the hour train ride from Glasgow to Lockerbie and back again—it was incredibly impactful. My experience as a University 100 tour guide, but also just as a passionate student who loves my school and its history, had made me incredibly aware of the Pan Am disaster and how important the memorial, and the students we lost, are to our school. 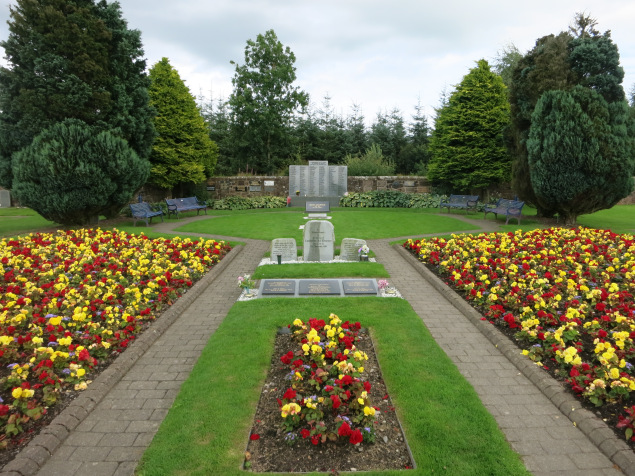 Hannah Butler spent time at the Lockerbie Garden of Remembrance.

I sat on a bench in the garden, read every name on the memorial wall and even flipped through the special Syracuse book that has a little bit of history about each of the students we lost. It was incredible to see how much Syracuse was a part of the Lockerbie exhibition too. When the woman in the visitor’s center discovered I was from Syracuse, she personally showed me around each of the exhibits and answered every question I had. This opportunity gave me the chance to “Look Back, and Act Forward” [the motto for Remembrance Week] and I could not be more grateful for that.

Q: What were some of the most enlightening parts of the study abroad for you?

A: Because my coursework was so diverse, I would say the most enlightening part of my study abroad experience was how much I enjoyed classes and topics I never thought I could be interested in. I never would have believed that a lecture on new and better medicines or a tour of a laser laboratory used for eye correction could be so interesting to a PR major. 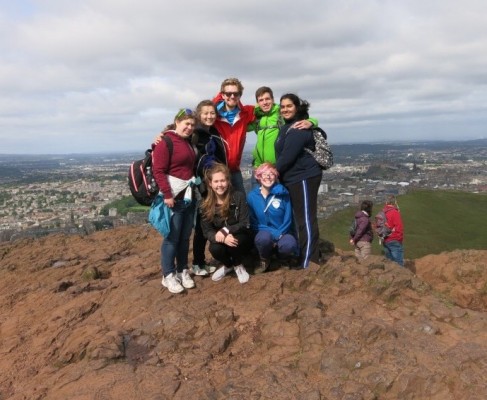 Hannah Butler, with her fellow students in the Fulbright-Scotland Institute, hiked to the top of Arthur’s seat, an ancient volcano that is the highest point in Edinburgh.

The other part of the trip that surprised—and flattered—me was how we were not just tourists in a country, but guests of Scotland. Being a part of this program gave me the chance to see, experience and meet lessons, locations and people I never could have gained access to if I had traveled to Scotland alone. For this incredible immersion into the country, I am truly grateful.

Q: How does this experience fit into any of your future plans?

A: I am very eager to go back to the UK (hopefully Scotland) for my post-graduate program, and this experience opened my eyes to the possibilities that living, learning and working in another country could hold for me. In addition, this experience instilled in me a global outlook, rather than one that is strictly centered around my own country, and this new perspective is going to make me a stronger global communicator in my future career. 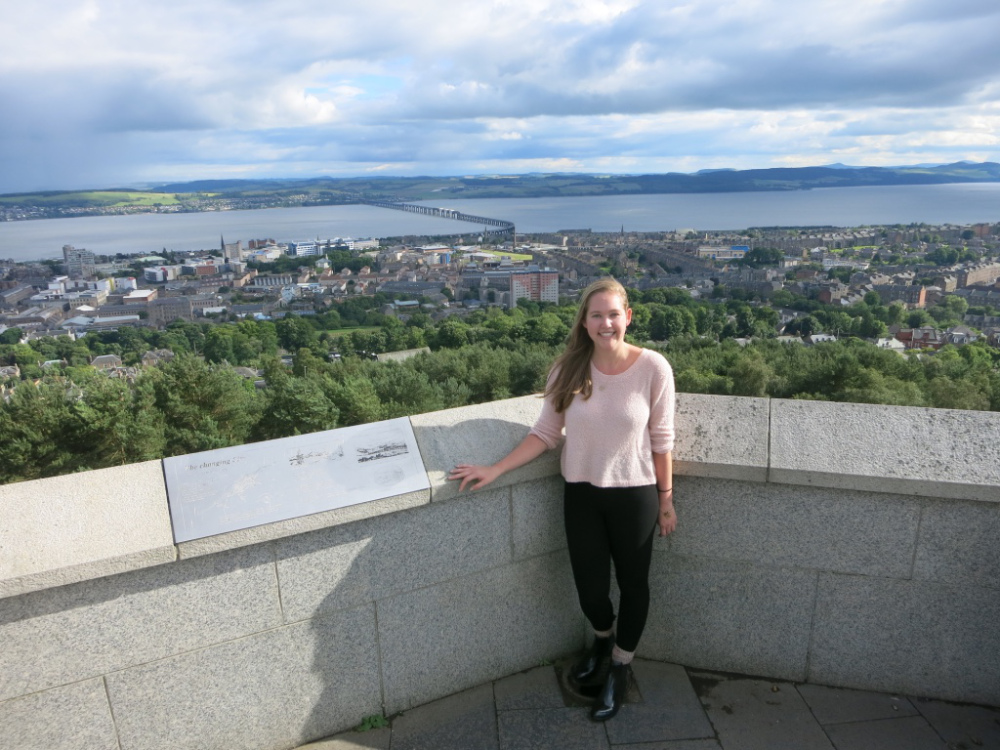 Hannah Butler, who participated in the Fulbright-Scotland Institute, gained a new global outlook during her time in Scotland.