Speaking from his long experience in foreign service, Ambassador William Rugh talked about the evolution of public diplomacy in government and academia. He discussed how public diplomacy has come to be a growing field, but has yet to be  recognized in many government sectors. 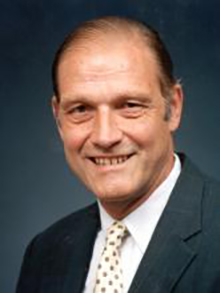 “Our job is to explain to a particular audience in their own context what America is trying to do in the world,” said Rugh. He was the keynote speaker for the event hosted by the Association for Public Diplomacy Scholars at Syracuse University. More than 15 professionals took part in the event Oct. 13 and 14. The event was presented by the public diplomacy program, jointly offered by the Newhouse School and the Maxwell School.

The panelists at the two-day event included foreign service officers, entrepreneurs, economists, journalists, CEOs and academics, who discussed the direction and future of public diplomacy and diplomats who can effectively communicate with diverse national and international audiences.

Rugh, who started the conference with a keynote talk, is currently a professor of practice at Northeastern University. From 1964-1995 he was a foreign service officer with the U.S. Information Agency. He was also a deputy chief of mission in Syria, ambassador to the Yemen Arab Republic and ambassador to the United Arab Emirates.

The ambassador also discussed the growing power of social media, and how it has become easier to connect with different populations in the world. This, he said, was a new frontier of public diplomacy, since it not only enabled the government to communicate with the top-tier politicians, but also with the general population.

“It helps spread the message to the audience who is most concerned,” he said.