The Tao of the Liberal Arts

Gerry Greenberg is an easy-going guy, but, if you want to get him started, challenge him on the value of a liberal arts education. 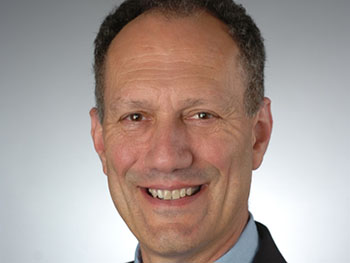 The Washington Post recently found this out when it ran an excerpt from the aptly titled “In Defense of a Liberal Education” (Simon & Schuster, 2015), by columnist Fareed Zakaria. Everyone—including Greenberg, senior associate dean in the College of Arts and Sciences—took sides on the issue. That Zakaria quoted a high-ranking public official as saying a “liberal education is irrelevant and that technical training is the new path forward” was, for Greenberg, like pouring salt in an open wound.

“Most people don’t even know what a liberal education is,” says Greenberg, also an associate professor of Russian and linguistics in the Department of Languages, Literatures and Linguistics. “The person quoted showed a blatant disregard for the value of the liberal arts. I agree [with Zakaria] that a misreading of the facts has huge consequences for higher education.”

Greenberg responded with a taut, 800-word essay, expounding on the meanings of phrases such as “liberal arts,” a “liberal education” and “arts and sciences”—which, as they turn out, mean different things to different people.

In this context, “liberal” means “free,” as in “free-thinking”; it is not the opposite of “conservative.” So when academics talk about a “liberal arts education,” they are referring to modes, methods and emphases that teach students to become productive members of a free society.

Greenberg says that, at Syracuse, these experiences encompass the natural and social sciences, mathematics and the humanities.

“The concept dates back to the Middle Ages, when free citizens studied the ‘trivium’ [grammar, rhetoric, and logic] and the ‘quadrivium’ [music, geometry, arithmetic, and astronomy] to get ahead,” says Greenberg, who joined the Syracuse faculty in 1985. “Today, the liberal arts still do this. They teach students the value of critical thinking, clear communication, complex problem-solving and understanding the world around them.”

Greenberg’s essay struck a chord with Valerie Strauss, an education reporter for The Washington Post, who featured it in her blog, the “Answer Sheet.” The post immediately went viral. (The same thing happened a few months earlier, when she posted his essay “The Tao of the Liberal Arts.”) Strauss has been deft in her timing of both articles, as Americans prepare to elect a president who will decide the fate of academic funding and policies.

Probably no one is more elated by all the attention Greenberg is getting than his colleagues at the Council of the Colleges of Arts and Sciences (CCAS). This fall, he cycles off the CCAS board after a productive, five-year run.

Based at the College of William and Mary in Williamsburg, Va., CCAS provides professional-development programming to its member deans, in hopes of sustaining the arts and sciences as a leading influence in higher education.

No surprise that Greenberg is required reading for CCAS officers and board members.

“I was able to learn much from Gerry about the true commitment to the centrality of general education in an undergraduate education,” says Anne-Marie McCartan, who served as CCAS executive director during much of Greenberg’s time on the board. “All [of us] looked to him to articulate and champion the value of a liberal education in today’s professionally focused world.”

McCartan reiterates her point with another Greenberg article, “A Prophecy for the Liberal Arts at Private Institutions in 2022,” which he co-authored a few years ago with Steve Peters, dean of the College of Business, Arts, Sciences and Education at Friends University in Wichita, Kan.

The article finds that, as university resources shrink and tuition climbs, the value-proposition of the liberal arts has no choice but to be re-imagined. “Technology and societal demographics are transforming our campuses,” Greenberg says. “Students are shopping for portability, the best price and convenience. We, as professors and administrators, must demonstrate the relevancy of the liberal arts in a market economy.” 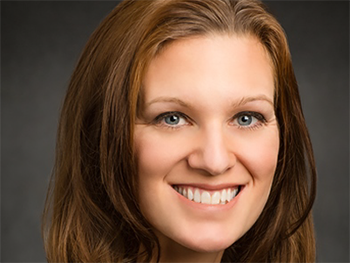 Amber Elaine Cox, who took over as executive director of CCAS in July, says Greenberg’s leadership of the council is not limited to the board. She credits him for breathing new life into the CCAS Mentoring Program for New Deans and Associate/Assistant Deans and for co-organizing the council’s 51st annual meeting, taking place in November in San Diego.

“CCAS is a stronger, more innovative and inclusive resource for deans across the country because of Gerry’s involvement,” Cox adds. “As we prepare for his transition off of the board, you can be certain that I’ll seek his wise counsel in other ways for years to come.”

Greenberg attended his first CCAS annual meeting in 2008, at the behest of then A&S Dean Cathryn Newton. “She thought I would find deans there with similar interests and concerns, and that it would be a good place to get new ideas,” says Greenberg, whose administrative purview includes academic affairs; the humanities; and curriculum, instruction and programs. “She was right, and, since then, my CCAS work has been enthusiastically supported by deans George Langford and Karin Ruhlandt, respectively.”

CCAS’ commitment to serving as a forum for the exchange of ideas and information, as well as representing the liberal arts at a national policy-making level appeals to Greenberg. No sooner had he joined the board in 2011 than he found himself on several planning committees, including one for a workshop on Massive Open Online Courses, or MOOCs, and another for a webinar series about interdisciplinarity.

Greenberg also helps organize CCAS annual meetings, where he frequently participates in panel discussions. One of them was devoted solely to his article with Peters.

Ruhlandt is quick to applaud Greenberg’s “probing, visionary mind.” “Gerry knows how to foster meaningful faculty-student interactions, as well as implement technologies and pedagogical models that diversify the time, place and experience of teaching,” she says. “He is a fount of knowledge and insights—and that’s good for the humanities and the liberal arts, in general.”

Langford agrees, calling him one of the University’s strongest advocates for the liberal arts tradition. “Gerry understands the challenges that liberal arts colleges face, and he’s been on the front lines, locally and nationally, with organizations that inform the public about the enduring value of a liberal education.” 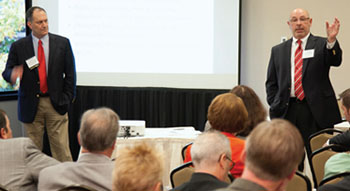 Greenberg (left) and Steve Peters at a CCAS annual meeting, 2012

Greenberg admits that much of his teaching philosophy is summed up in his writings. He regards “The Tao of the Liberal Arts,” which took the Internet by storm a year ago, as the culmination of years’ worth of readings, discussions and reflections. In it, Greenberg draws comparisons between the liberal arts and Taoism, an ancient Chinese philosophical system that explains why things are the way they are and why things happen the way they do.

“A liberal education is a process, and must be experienced to understand it,” he says, paraphrasing his essay. “Just as all liberal arts degrees are not the same, there is no single path to the enlightenment a liberal education provides. Along the way, each of us must grapple with complex moral issues in the humanities, address social issues in the social sciences and learn about the behavior of the world and the entities living in it through the natural sciences.”

This approach is not lost on Nancy Gutierrez, dean of the College of Liberal Arts & Sciences at the University of North Carolina at Charlotte. A former CCAS board member and president, she lauds Greenberg for his deep and profound advocacy for the liberal arts and sciences—one that, in her words, is “full of wit and humor.”

“Gerry did not let himself be limited by what was possible, but tried to help us all aspire to what was necessary, even if that sometimes seemed outside our reach,” Gutierrez says. “As a result, we were stronger leaders for CCAS.”