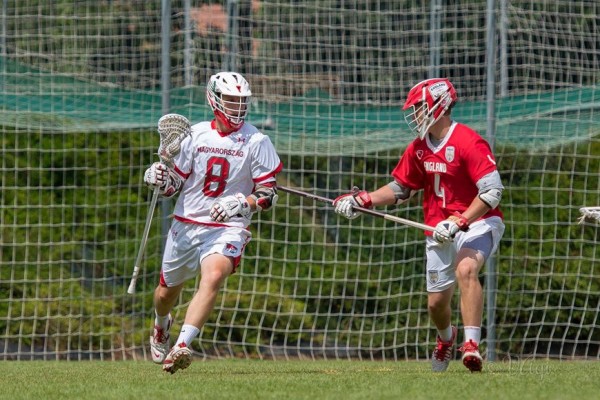 As a Ph.D student in Earth sciences, Benjamin Uveges knows the rigors of research and deep thought. He also knows his way around a lacrosse field. Uveges played four years of lacrosse at the collegiate level. Then, this past summer, he performed on the international lacrosse stage, taking part in the European Championships. We recently asked Uveges about his goals, both academically and athletically.

Q. How did you become involved with the Hungarian lacrosse team?

A. I got involved with the team somewhat by chance. A few years ago, while the Lacrosse World Games were going on in Denver, my dad happened to see that Hungary was one of the countries that was looking to put a team together, but couldn’t do it in time for the Denver games. So we did some digging and saw that the guys in charge of putting the team together were holding tryouts for Americans with Hungarian heritage to join up and bring some experience, and frankly just numbers, to the team, as the Hungarians were having some trouble fielding a full 23-man squad. I have been playing for a long time, and had played four years of collegiate lacrosse at McGill University, and was looking for a way to play again in grad school. My dad’s side of the family is all of Hungarian descent (both sets of his grandparents, so my great-grandparents, immigrated here in the early 1900s), so I qualified as having Hungarian heritage. And I decided to give it a try and went to tryouts in June of 2015 in Philadelphia and January of 2016 in Budapest. I ended up making the team, and went on to play in the European Championships with them this past summer.

Q. What does your involvement actually entail?

A. The European Championships were held just outside of Budapest this summer, so I was lucky enough to get to spend almost a month in Hungary, as I had to go a week early for practices. The games consisted of 24 teams from across Europe, and was structured as a pool play tournament. We were placed in Pool A (random draw) and played everyone in our pool once. Once pool play was over, the teams were divided up into three playoff divisions, two teams from each pool went into each division, and it was basically run like three separate playoffs. In the end, I think we ended up playing eight games over the course of 10 days. We finished fifth in our pool, which put us in the lowest playoff division, but we were able to go undefeated once we hit the playoff bracket, and finished 17th overall in the tournament.

Q. How difficult is it balancing your studies with lacrosse?

A. In terms of balancing lacrosse with my studies, it really only became an issue when I had to travel over to Hungary for a month during the summer, which is typically the time when I get the most research done. I have finished my graduate coursework, and passed my qualifying exam, so now I’m at the point where I am just trying to finish up my research/dissertation. Most of the time it was just trying to get back in shape and keep up my stick skills on my own time. I only had to travel for the team a couple times, and to Hungary only twice (last January for tryouts, and then again for the Euro Games). Because lacrosse isn’t as big of a sport as, say, basketball or soccer, the national teams don’t actually have enough money to pay the players anything, or pay for them to travel, so the total amount of travel was kept to a minimum.

Q. Is there any connectivity between your graduate work and lacrosse? Does one help or impede the other?

A. I think that there is certainly a connection between my graduate work and lacrosse, and just athletics in general. I find that having some outlet through which I can blow off steam is not only beneficial for me, but almost a necessity. I definitely get jumpy if my work keeps me from doing some form of exercise for too long, and I think that my academics would suffer if I didn’t have an outlet. I think that having something that is physically stimulating, can both enhance and balance out the mental stimulation and rigor of graduate school.