University Union has announced Rock the Dome 2016, featuring rock band The 1975, with direct support from alt-pop duo Oh Wonder. Rapper 070 Shake will open the show. The show will take place on Nov. 4 at 6:30 p.m. in the Carrier Dome. 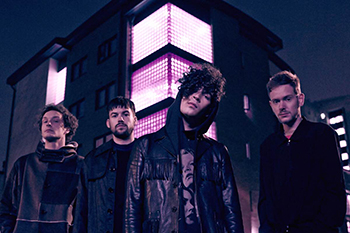 School friends Matty, Adam Hann, George Daniel and Ross MacDonald formed The 1975 in the English town of Wilmslow, south of Manchester, in 2002. Upon emerging 10 years later with the Facedown EP, it was instantly clear that this was a band that was going to be controversial, even problematic, for some. Their sound was unashamedly glamorous (one of Matty’s favorite  words), the lyrics heart-on-sleeve, spill-your-guts confessional, and the music brazenly diverse. The band’s latest album, “l like it when you sleep, for you are so beautiful yet so unaware of it,” came out in February. The album became the group’s second number one in the United Kingdom, debuting atop the UK Albums Chart, with combined sales of over 58,000. It became  the group’s first number one on the US Billboard 200, with 98,000 pure album sales in its debut week. Notable singles include “Love Me,” “Somebody Else” and “The Sound,” which became the band’s highest-charting single in the UK, peaking at  #15.

Oh Wonder is a London-based alt-pop duo consisting of Josephine Vander Gucht and Anthony West. Their eponymous debut album was released in September 2015 and was met with critical acclaim. Though they vary from piano-led ballads to whip-sharp electronica, what unites all of Oh Wonder’s songs is their extraordinary sense of humanity. “We didn’t realize it at first, but a lot of our songs are about relationships and support,” says Josephine. The album has been called “simplistically stunning”  and “hauntingly beautiful.” Despite being a new project, the duo has already experienced touring success, selling out shows in London, Paris, New York and LA a week after releasing their album.

070 Shake is a rising rapper hailing from North Bergen, New Jersey. She has been blowing up the blogosphere with notable tracks like “Thru The Speakers,” “Make It There” and “No Enemies.” She is a member of rap collective 070, and has been featured on Drake’s OVOSound Radio on Beats 1.

The pre-sale for only full-time SU and ESF students will run from noon on Monday, Oct. 17, to 11:45 p.m. Wednesday, Oct. 19, and will be online only at ticketmaster.com. The public on-sale will start Thursday, Oct. 20, at noon.

The student price is $25 for general admission dance floor access seats, and $20 for first level general admission and second level reserved seating. The general public price is $40. Each student may order a maximum of two tickets at these special student prices. For these special student prices, you must be a Dome-eligible full-time SU/ESF student and order using your own nine-digit SU/ESF ID number. The account created for ordering must use the student name associated with that student ID number; otherwise you may not receive your tickets. Starting at noon on Monday, Oct. 17, students must go to ticketmaster.com to order their student-priced ticket. Once on the event page, students should click on “Got an Offer Code?” and enter their nine-digit student ID number to start the order process.

All general admission tickets must be picked up by the student with their SU or ESF ID used to place the order. Pick-up for these General Admission tickets—printed on special colored stock—will run Wednesday, Oc. 26-Friday, Oct. 28, from 10 a.m.-6 pm. Pickup is located just inside Gate N of the Carrier Dome (northeast corner of the Dome).