Syracuse Symposium continues its yearlong exploration of “Place” with a visit by Alan Michelson, a Mohawk member of the Six Nations of the Grand River and an award-winning artist, Nov. 1-2. 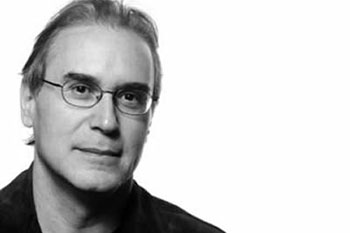 On Tuesday, Nov. 1, Michelson will discuss “Seeing Place Through Indigenous History” from 4:30-6 p.m. in the Peter Graham Scholarly Commons, 114 Bird Library. The following day, he will lead a small-group workshop on site-specific art and native history from 9 a.m.-noon in 304 Tolley.

Both events are free and open to the public; however, the workshop requires registration. To RSVP or request any accessibility accommodations, contact humcenter@syr.edu by Monday, Oct. 24.

Syracuse Symposium is a yearlong series, organized and presented by the Humanities Center in the College of Arts and Sciences. For more information, call 315.443.7192 or visit humcenter.syr.edu.

“Alan Michelson employs various media to address notions of place in his public art and installations,” says Vivian May, director of the Humanities Center and professor of women’s & gender studies. “His work is both elegant and eloquent, and draws on the complexities of environmental advocacy, sovereignty and the juxtaposition of native and other cultures. We are very excited to host him.”

Michelson’s visit will focus primarily on “Mantle,” a permanent monument that he is erecting on Capitol Square in Richmond, Va.

Commissioned by the Virginia General Assembly, “Mantle” will commemorate the life, achievements and legacy of American Indians in the Commonwealth of Virginia. The $1 million project is slated to unveil next year, and will combine four integrated spiral elements to create the shape of a nautilus. At the center will be a meditation area and an infinity pool. 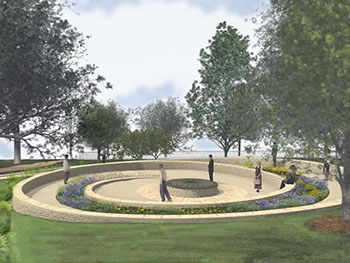 A schematic design of the northeast view of “Mantle.”

“[‘Mantle’] requires the visitor to neither look up nor look down, but invites one to enter—from the east—and participate in it,” says Michelson, adding that a five-foot-wide winding footpath will follow the monument’s outline. “It is not conceived as a static monument to be venerated, but an active one to be experienced by moving off the everyday grid and into the American Indian circle.”

Michelson was invited to Syracuse by Scott Manning Stevens, associate professor and director of Native American studies in A&S.

Stevens says both events have multiple audiences in mind, including students interested in the practice and scholarly study of visual art.

“Alan will discuss the associated challenges and opportunities of a Native American visual artist drawing on historical notions of place and its intimate relationship to the indigenous peoples connected to it,” says Stevens, also an associate professor of English. “His visit surely will resonate with students and scholars alike.”

Based in New York City, Michelson has carved out a successful career for himself as an artist, writer and lecturer. He recently completed “Third Bank of the River,” an award-winning permanent public art project for the U.S. Port of Entry that was commissioned by the U.S. General Services Administration.

His art has been featured in more than 40 solo and group exhibitions around the world. It currently is part of the permanent collections of the National Gallery of Canada (Ottawa), the National Museum of the American Indian (NMAI) and the Art Institute of Chicago.

A prolific author, Michelson has published books, articles and essays, including “Failure to Launch,” part of the companion book to the NMAI symposium “Vision, Space, Desire: Global Perspectives and Cultural Hybridity.” He also is a sought-after lecturer and panelist.

Michelson was born in Buffalo, but raised in Massachusetts, where he earned a B.F.A. from Tufts University. He eventually settled in New York City and, over the years, has taught at the Rhode Island School of Design, The New School and SUNY Purchase College. He is the recipient of many grants and awards, including fellowships from the National Endowment for the Arts and the Native Arts and Cultures Foundation.

Much of his art draws on Haudenosaunee concepts and perspectives, which have their origins in Central New York. “The forms that I invent are often based on Haudenosaunee cultural models, like wampum belts, blended with media or materials from the dominant culture, such as video or glass,” he says. “My work is grounded in place and informed by history; therefore, research is an integral part of my practice.”