Urban Video Project (UVP) and parent organization Light Work are presenting a special screening of acclaimed Thai filmmaker and installation artist Apichatpong Weerasethakul’s most recent feature film, “Cemetery of Splendor,” followed by a Skype Q&A with the filmmaker and reception at the Everson Museum of Art on Thursday, Oct. 20. This event is free and open to the public; no ticket is required. 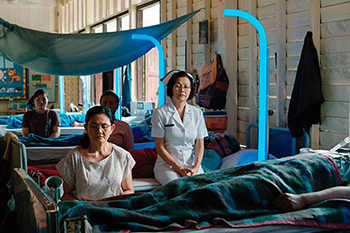 Still from “Cemetery of Splendor”

This event is held in conjunction with the exhibition of a related installation-based piece, “Fireworks (Archives)” at UVP Everson through Oct. 27 at UVP’s permanent outdoor architectural projection venue on the Everson Museum plaza. The projection runs every Thursday through Saturday night from dusk to 11 p.m. “Fireworks (Archives)” is an hypnotic, hallucinatory counterpoint to the slow, sun-drenched melancholy of “Cemetery of Splendor.”

This event is part of “UVP 2016-2017: Interzones,” a year-long program at UVP and partner organizations that will feature the work of established and emerging artists who explore liminal states, haunted places and the space in between.

In “Cemetery of Splendor,” a mysterious sleeping sickness besets soldiers, who are transferred to a temporary clinic in a former school. The memory-filled space becomes a revelatory world for housewife and volunteer Jenjira as she watches over Itt, a handsome soldier with no family visitors. Jen discovers Itt’s cryptic notebook of strange writings and blueprint sketches suggesting there may be a connection between the soldiers’ enigmatic syndrome and the mythic ancient site that lies beneath the clinic.

Called “the most quietly surprising filmmaker working today” by New York Times film reviewer Glenn Kenny, Weerasethakul has received international acclaim for his films and installations. His 2009 film, “Uncle Boonmee Who Can Recall His Past Lives,” won the Palme d’Or prize at the 63rd Cannes Film Festival, and his most recent film, “Cemetery of Splendor” screened at Cannes in Un Certain Regard. Additional feature films include: “Syndromes and a Century” (2006), “Tropical Malady” (2004), “The Adventures of Iron Pussy” (2003), “Blissfully Yours” (2002) and “Mysterious Object at Noon” (2000).

His work has been exhibited at art institutions around the world, including the Sharjah Biennial in the UAE (2013) and dOCUMENTA 13 in Kassel, Germany (2012), and in solo and group exhibitions including Haus der Kunst in Munich; Walker Art Center, Minneapolis; and New Museum, New York.

The screening of “Cemetery of Splendor” and the Q&A with the filmmaker is made possible through the generous support of the CNY Humanities Corridor and the Syracuse University Visiting Artist Lecture Series. This event is part of the official program of the 2016 Syracuse International Film Festival.