Joe Hatfield, who graduated from the Department of Communication and Rhetorical Studies’ (CRS) master of arts (M.A.) program in the College of Visual and Performing Arts last May, is the 2016 recipient of the M.A. Thesis of the Year Award given by the Master’s Education Division of the National Communication Association (NCA). 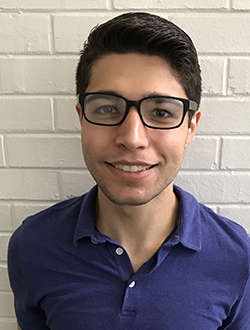 Hatfield’s M.A. thesis, supervised by CRS Professor and Chair Charles E. Morris III, is titled “Southerners and the City: Queer Archives, Backward Temporalities and the Emergence of AIDS.” The award will be presented at the NCA’s annual convention in Philadelphia next month.

“Joe’s thesis exemplifies his passion and vision as an archival queer, one who seeks and stages the past for present and future worldmaking,” says Morris. “His research explored the Southern styles of three gay men living in New York City in a time when political and cultural gains for LGBTQ peoples and communities were under assault by resurgent homophobia catalyzed by the AIDS crisis. The project took him to the LGBT Community Center and New York Public Library in Manhattan, as well as to multiple archival sites online. Evidencing some of the best instincts and methodological traditions in rhetorical studies, performance studies and critical/cultural studies, Joe’s sophisticated and moving thesis is embodied, reflexive, rigorous, insightful and inventive.”

Hatfield is currently in his first year in the Ph.D. program in rhetorical studies at the University of Colorado, Boulder.