On Monday, Sept. 26, the Syracuse University LGBT Resource Center celebrated 15 years of offering support, building community and educating members of the University community. Friends, alumni and allies of the center gathered in the Comstock Room at the Sheraton to listen to stories from the center’s history, share their own thoughts and memories, and connect. 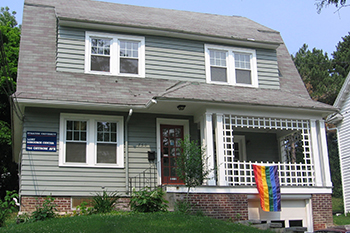 “The LGBT Resource Center has been such a special and sacred space for so many LGBTQA people over the past 15 years,” said Tiffany Gray, director of the LGBT Resource Center. “The friendships and communities that are formed are invaluable. I am humbled and honored to be the director of such a necessary and important social justice centered space that acknowledges and affirms people with marginalized genders and sexualities.”

In 1998, then-student Jordan Potash proposed establishment of a Rainbow Task Force to deal with issues of concern to the campus’ LGBT population. While SU had several LGBT student organizations, there was no official support for LGBT students from the University. Potash submitted his proposal to then-senior vice president and dean of student affairs and now special assistant to the Chancellor Barry L. Wells, who decided that it was more than a student issue, it was a campus community issue.

Wells reflects, “It was the vision of the Division of Student Affairs to be an international leader in student-centered, co-curricular education demonstrating a commitment to collaborative learning, citizenship development and the celebration of diversity. Guided by this vision, the University’s core values and my own commitment to human rights and social justice, I knew that the SU community would benefit from the creation of a LGBT Resource Center. Fortunately for me and for SU, Jordan Potash worked in my office and shared in this goal of establishing greater support for the LGBTQ community on campus.”

After conducting several open forums on campus, one of the committee’s chief recommendations was the creation and staffing of an LGBT Resource Center (LGBT RC) to serve students, staff and faculty. In October 2001, the center opened its doors from its temporary location in the basement of Health Services. Adrea L. Jaehnig, a former associate director of residence life, was hired as the founding director of the LGBT RC.  The center was temporarily housed in 111 Waverly Ave., and after careful consideration, the Division of Student Affairs identified 750 Ostrom Ave. as its new home. After renovations, the center relocated there in the spring of 2002 and this is where its remains and continues to make a profound impact on the community.

“It’s been a privilege and honor to work closely with our staff and students who directly support the center,” says Rebecca Reed Kantrowitz, senior vice president and dean of student affairs. “I am continually impressed by their passion, expertise and genuine commitment to serving our community so well.”

The LGBT Resource Center is a welcoming space built on community and social justice. The center strives to create a safer campus that promotes understanding, acceptance, empowerment and visibility of people with marginalized genders and sexualities. For Jeshurun Joseph ’15, the center was an invaluable resource during his time at SU, “At a time when I wasn’t sure about who I was and what it even meant to be Queer, the LGBT Resource Center helped me love and accept myself, as well as build invaluable friendships with amazing people that will last a lifetime.”

The center encourages thoughtful exploration of gender and sexuality, as well as the complex intersections of multiple identities. The LGBT RC has successfully carried out many programs through its 15 years. Programs include Coming Out Month, an entire month of lesbian, gay, bisexual, trans, queer and asexual-themed programming; discussion groups such as Embody or Fusion that explore gender, sexuality and other intersectional identities; Safer People, Safer Spaces training; and the Rainbow Banquet.

The Rainbow Banquet, established in 2003, is a favorite of many students, including Maysam Seraji ’18, who fondly recalls, “My favorite memory of the LGBT Resource Center is attending the Rainbow Banquet and having a space to dance with friends, be with my partner, dress in ways that affirm my identity and celebrate Queer life freely and openly. Unfortunately, those spaces are hard to come by.” The banquet celebrates LGBTQA communities at Syracuse University, SUNY-ESF and in the city of Syracuse. The free event features a banquet dinner, a student keynote speaker, graduating LGBTQA student recognition, the presentation of the Rainbow Recognition Awards, music, and dancing!

One of the key ways the LGBT RC engages the great University community is through the Safer People, Safer Spaces training. The training gives participants opportunities to engage in community-building and develop actions steps to create safer, more inclusive spaces on campus and beyond. This academic year alone, more than 200 participants have benefited from the training.

After 15 years on campus, the LGBT RC has impacted many in the community. James Duah-Agyeman, the director of the Office of Multicultural Affairs and chief diversity officer for the Division of Student Affairs, says about its impact, “Over the past 15 years, the resource center has called upon the entire SU community to foster a supportive environment for our LGBTQ+ students and allies. I have personally been the beneficiary of the center as I have become more aware of the issues of sexual orientation, gender identity and gender expression. I look forward to collaborating with Tiffany and their leadership team to address these issues in our multicultural center spaces.”

Gray continues to focus on the future, “I know that our work isn’t done, but I look forward to the next 15 years as we continue to explore the complex intersections of our multiple social identities, enhance our allyship efforts and ultimately strive to create safer people and safer spaces on campus and beyond.”

The LGBT RC offers great programming year-round. The annual Coming Out Month celebration began on Oct. 1, and you can access all the planned activities by visiting the LGBT RC website.