Syracuse University and its Bandier Program were listed by Billboard as among the “12 Elite Music Business Schools Shaping the Industry’s Future.” Billboard describes the featured schools as “drawing students ready to face the demands of the 21st-century music industry.” 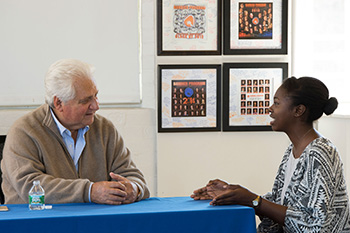 Based in the College of Visual and Performing Arts’ Rose, Jules R. and Stanford S. Setnor School of Music, the Bandier Program is a non-performance-based undergraduate program that focuses on music as it functions in all media, particularly new media. The multidisciplinary program prepares students for the music and entertainment industries via a curriculum that includes coursework in the S.I. Newhouse School of Public Communications, the Martin J. Whitman School of Management and the College of Arts and Sciences.

“I am proud that the Bandier Program is being recognized for the work that we do in preparing students for a career in the music business,” says Ulf Oesterle, assistant professor and interim director of the program. “We have a great team in place here on Syracuse University’s main campus and at our global locations in Los Angeles and London, where many of our students study.  Our alumni are active and always looking for ways to engage with the current students and that has contributed to the success of the program.”

The Bandier Program was made possible through a generous gift from Syracuse University Trustee and Sony/ATV Music Publishing Chairman and CEO Martin Bandier ’62.