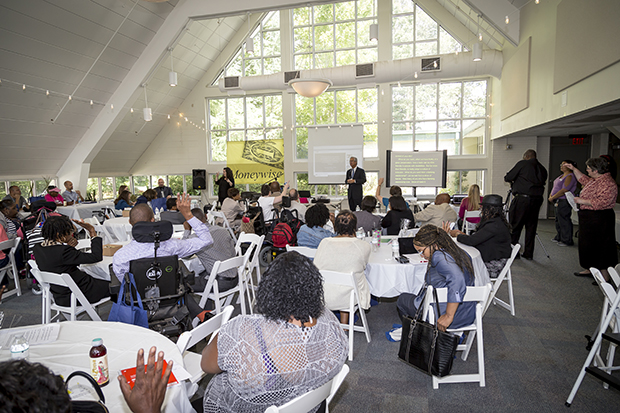 Participants at the Southeast ADA Center-sponsored Moneywise conference focusing on the ADA and financial inclusion of people with disabilities.

Based in Atlanta, the Southeast ADA Center provides information, training and guidance about the ADA throughout the eight-state Southeast region. BBI provides the center with analyses of legal issues affecting the ADA as well as other resources such as “plain language” legal briefs written by Syracuse University College of Law students.

“For the past 10 years, the Southeast ADA Center has provided leading-edge, accessible information on all aspects of the ADA,” says Peter Blanck, University Professor at Syracuse University College of Law and chair of BBI. “This grant, our third five-year commitment, enables BBI and the Southeast ADA Center to continue to make a positive impact on the lives of individuals with disabilities and their families by fostering ADA understanding and compliance.”

In addition to funding ongoing operations, the award will enable the Southeast ADA Center to conduct new research examining the accessibility of financial services, at physical and online sites, for people with disabilities. Several studies will examine financial accessibility as an aspect of community inclusion and participation. Michael Morris, BBI executive director, notes “There is a critical need for information on how financial institutions provide accessible services for people with disabilities.” The Southeast ADA Center “will collaborate with individuals with disabilities, banks and credit unions to gain a better understanding of gaps in accessibility. The research will help financial institutions address these issues and educate the public on possible solutions.”

“This program is just one example of the many important initiatives that the Burton Blatt Institute spearheads to advance the full participation of people with disabilities,” says College of Law Dean Craig M. Boise. “In addition to positively affecting numerous individuals and communities, the institute provides many practical learning experiences for College of Law students who are interested in disability rights law.”

About the Southeast ADA Center

The Southeast ADA Center answers questions, and provides training and information about the Americans with Disabilities Act (ADA). The center, based in Atlanta, serves an eight-state geographic region (Alabama, Florida, Georgia, Kentucky, Mississippi, North Carolina, South Carolina and Tennessee) and has a network of partners in each state that includes centers for independent living (CILs), individuals with and without disabilities, small and large employers and businesses, nonprofit organizations and universities, and state and local government agencies. The center is one of 10 regional ADA centers in the ADA National Network. For more information, visit: www.adasoutheast.org.