The Tully Center for Free Speech in the Newhouse School will honor Jason Rezaian, the Washington Post reporter who was imprisoned in Iran for 544 days, with the 2016 Free Speech Award. The award is given annually to a journalist who has faced obstacles to free speech. 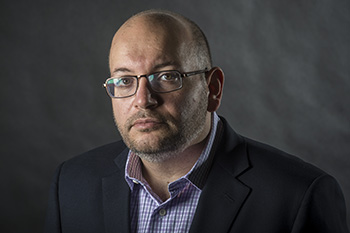 The award program will be held Monday, Oct. 24, at 4 p.m. in the Joyce Hergenhan Auditorium, Newhouse 3. The event is free and open to the public. Parking is available in SU pay lots. Follow on Twitter at #TullyAward.

Rezaian was chosen from a pool of international journalists who have faced significant turmoil in performing journalism. He was nominated by a panel of industry leaders and free press advocates and selected by a committee of Newhouse faculty and students.

“Jason faced one of the most harrowing experiences a human could endure simply because he was an American journalist,” says Roy Gutterman, Tully Center director. “We are honored to welcome him home and bring him to Syracuse to share his stories with us.”

Rezaian was a reporter in Tehran from 2009-2014, serving as the Washington Post’s correspondent starting in 2012. In addition to reporting on Iran’s politics, including presidential elections and nuclear negotiations, he wrote often about daily life in Iran.

In July 2014, he and his wife, Yeganeh, were arrested. She was released the following October, but Rezaian spent nearly a year and a half in Tehran’s Evin Prison. For a time, U.S. officials had no information about his whereabouts. Eventually,  he was charged with espionage and other serious crimes, and the Post reported in October 2015 that he had been convicted. He was released early this year as part of a prisoner swap.

Rezaian is currently a fellow at the Nieman Foundation for Journalism at Harvard University, and a Terker Distinguished Fellow at George Washington University School of Media and Public Affairs.

Endowed by the late Joan Tully ’69, the Newhouse School’s Tully Center educates students and the public about the important value of free speech through education, resources and research. As part of her bequest, Tully asked that an award be given to honor a journalist who has shown courage in facing a free speech threat. The awardee visits Syracuse University for several days to be honored at an award program, accept a cash award and visit classes across campus.