Acclaimed international photojournalist Lynsey Addario—renowned for her striking images of war zones and displaced refugees—is the next speaker in the University Lectures series on Tuesday, Oct. 18, at 7:30 p.m. in Hendricks Chapel. 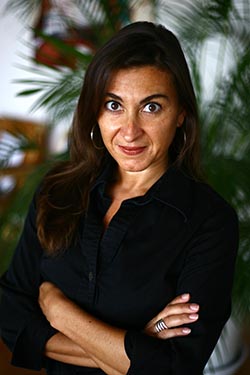 Her appearance is co-sponsored by the S.I. Newhouse School of Public Communications. The event is free and open to the public. American Sign Language (ASL) interpretation and Communication Access Realtime Translation (CART) will be available.

Working in Afghanistan, Congo, Darfur, Iraq, Lebanon, Libya and other hotspots for National Geographic, The New York Times, Time and Newsweek, Addario has braved dangerous and chaotic situations, has survived death threats and has twice been kidnapped—all in pursuit of her powerful imagery.

In March 2011, she was one of four New York Times journalists who went missing in Libya—captured, detained and threatened by Muammar Qaddafi’s soldiers, who were engaged with rebel forces at the beginning of the Arab Spring. On the sixth day of their harrowing captivity, Addario and her colleagues were released by the Libyan Army. Her depiction of the physical and psychological abuse endured by the group at their Libyan captors is recounted in her bestselling memoir, “It’s What I Do: A Photographer’s Life of Love and War” (Penguin Press, 2015). The book has been optioned as a feature film with Steven Spielberg directing and Jennifer Lawrence portraying Addario.

American Photo Magazine in 2015 named Addario one of the five most influential photographers of the past 25 years. She was part of an eight-person New York Times team that won the 2009 Pulitzer Prize for International Reporting for the newspaper’s “masterful, groundbreaking” series of stories and photos covering the United States’ “deepening military and political challenges in Afghanistan and Pakistan.”

Among her other honors, Addario is the recipient of a MacArthur Fellowship, the International Center of Photography’s Infinity Award and the Overseas Press Club’s Oliver Rebbot Award.

She was one of 20 women on Oprah Winfrey’s 2010 Power List for her “Power of Bearing Witness” and was also one of Glamour Magazine’s 20 women of the year in 2011. In 2014, she was included as one of 11 renowned women photographers in the National Geographic Women of Vision exhibition and photography book.

The SU Bookstore will be on hand at Hendricks Chapel with copies of her book available for purchase, and Addario will be signing copies after her lecture.