“Running for Cover: Politics, Justice and Media in the Syrian Conflict” kicked off Thursday morning with opening remarks from S.I. Newhouse School of Public Communications Dean Lorraine Branham and Ken Harper, the director of the Newhouse Center for Global Engagement. 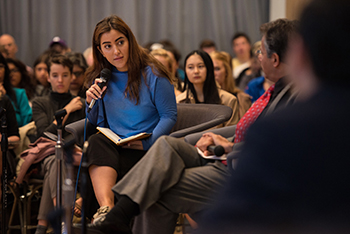 International Relations major Talya Sever asks a question during one of the panels on Syria.

The day-long event, organized by Harper, focused on accountability in the Syrian conflict. The dialogue analyzed the international community’s response to the Syrian conflict and its effects, as well as the challenges to reporting the war, developing political solutions and seeking justice for victims.

“We owe this to the people of Syria. This is their reality,” said Lamis Abdelaaty, assistant professor of political science in the Maxwell school said during the first panel, “The Geopolitical Situation in Syria.”

Participants also explored how the international community captures news and images from the conflict, investigates alleged war crimes and human rights violations and protects refugees. They also discussed lessons learned from this conflict that might inform the response to future conflicts.

“We’re proud to host this event and are excited by the conversations that will be taking place today,” Dean Branham said.

The event grew to fruition when College of Law professor and the founding director of the Syrian Accountability Project David Crane approached Dean Branham about a co-sponsorship of the program and Branham connected Crane with Harper and the Newhouse Center for Global Engagement.

“The Newhouse Center for Global Engagement connects students to the world and the world to students. We want to take students out of the classroom and connect them with stories that matter,” Harper said.

The event’s panels, in addition to “The Geopolitical Situation in Syria,” were “Accountability for Atrocity,” “The Media’s Role,” “Social Media in Reporting War” and a final panel on “Next Steps.” Panelists included representatives from Amnesty International, professors with expertise in the area and a slew of journalists, among others.

Photographs of the conflict hung from the walls outside of the Joyce Hergenhan Auditorium and behind the seats speakers gave their remarks from. The event also included a 360-degree video gallery. Harper stressed the importance of the inclusion of these images in the event.

“This was done out of respect,” Harper said. “We can’t forget that while we sit here, the people we are talking about still have humanity that deserves our respect.”

Each panel also included an open seat to encourage questions and participation from the audience. The

Crane closed the day’s events at 5 p.m. with remarks of his own.