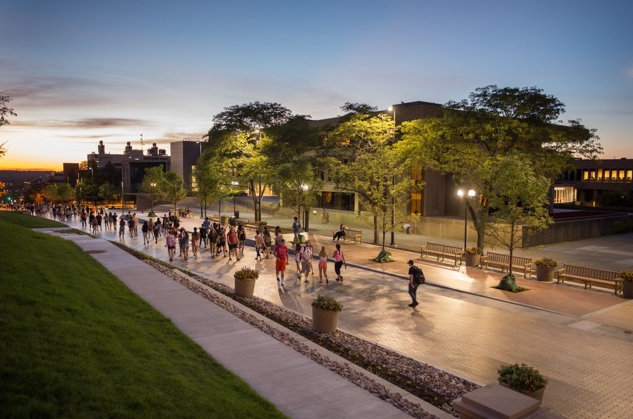 Steven L. Einhorn ’64 G’67 and Sherry Einhorn ’65 have provided a $1 million naming gift for what will be know as “The Einhorn Family Walk.”

For more than two years, Steven L. Einhorn ’64, G’67 has served as chair of the Campus Framework Advisory Group, a team of trustees, students, faculty and staff charged with imagining a transformative, student-centric vision for the Syracuse University campus.

Today, not only does Einhorn continue to lead the effort to bring the bold concepts contained within the Campus Framework to life, he’s also responsible for naming one of the framework’s signature projects. As a result of a $1 million naming gift from Steve and Sherry ’65 Einhorn, the University Place Promenade will now be known as “The Einhorn Family Walk.” Details of a celebration event will be announced soon.

For the Einhorns, giving back to their alma mater is a family tradition. Their son Richard ’92 serves on the Whitman School Advisory Council. “As alumni of this great university, Sherry and I take great pride in knowing this gift will benefit Syracuse University students, faculty and staff for generations to come. We are thrilled to be giving back to our alma mater as it has given us and our son so much,” says Einhorn. “This is an exciting time to be a part of the Syracuse University community and I am proud to have the opportunity to be involved in the effort to transform the University’s physical environment.” 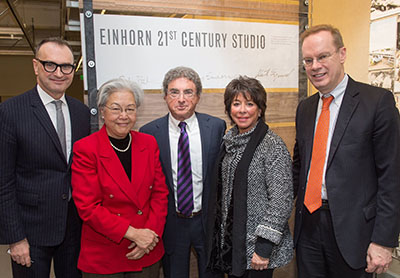 The Einhorn family’s gift is the lead gift in a major fundraising effort by the University to raise funds to support the many projects contained within the draft Campus Framework. It’s also the first in a series of naming opportunities for alumni and donors interested in leaving their permanent mark on The Einhorn Family Walk. Among the first-phase projects are the National Veterans Resource Complex (NVRC), a first-of-its-kind academic and research building, dedicated to advancing the lives of veterans and their families; and the new West Campus Project, which will include substantial renovations to Archbold Gymnasium to create the Arch, a new state-of-the-art student-focused health and wellness complex.

“I am deeply grateful to Steve and Sherry for their leadership and generosity,” says Chancellor Kent Syverud. “Their naming gift for the inaugural Campus Framework project sets a wonderful course for the Framework, as does Steve’s leadership of the Framework Advisory Group.”

Einhorn, who has served on the Board of Trustees for nearly four years, has a long record of service and giving to the University. A member of the School of Architecture Advisory Board for many years, Einhorn also served on the jury for the NVRC design competition. In 2014, the Einhorns were honored at the School of Architecture with the grand opening of the Einhorn 21st Century Studio. The studio, a prototype for design education conceived to support the widest array of teaching styles and rapidly changing technologies, was made possible by their significant gift. In addition to the creation of the advanced technology studio, their gift helped support the school’s creation of a new website and the establishment of the Einhorn Lecture, which is given annually by a professional whose firm embodies an innovative approach to the integration of strategic business planning and design.

For those interested in being a part of history and helping to transform the University’s footprint, there are many giving opportunities. The University is seeking donations, including naming gifts, for all initiatives contained within the draft Campus Framework. To make a gift, contact Matt Ter Molen, senior vice president and chief advancement officer, via email at termolen@syr.edu or by phone at 315.443.9161.

To learn more about the draft Campus Framework and to provide real-time feedback, visit http://CampusFramework.syr.edu.