Syracuse Symposium continues its yearlong examination of “Place” with a special visit by an audiovisual historian from the University of Southern California (USC). Emilie Garrigou-Kempton, academic relations and outreach officer at the USC Shoah Foundation’s Visual History Archive (VHA), will lead a workshop titled “Conducting Research with Audiovisual Testimonies of Genocide Survivors” on Monday, Oct. 10, from 9-11:30 a.m. in the Peter Graham Scholarly Commons, 114 Bird Library. 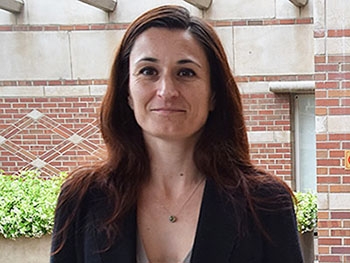 Free and open to the public, the workshop will provide an overview of the VHA, a free online database of more than 53,000 video testimonies of survivors and witnesses of the Holocaust and other genocides.

“In many of the testimonies, the interviewees speak to matters of ‘place,’ both literal and figurative,” says Vivian May, director of the Humanities Center and professor of women’s & gender studies in A&S. “The workshop will familiarize attendees with the database interface and search engine, will showcase examples of teaching and research, and will enable participants to start exploring material relevant to their own work.”

“The Syracuse University Libraries have made the VHA database available to any and all users from our campus community and the Central New York region since 2008, back when only 25 institutions worldwide were serving as full-access sites,” says Wasylenko, librarian for citizenship and humanities. “Since then, countless individuals engaged in genealogical and historical research, teaching and learning or documentary filmmaking have benefited enormously from this unique, truly extraordinary resource.”

A majority of VHA’s testimonies are from Holocaust survivors and witnesses, interviewed during the 1990s. The VHA also devotes space to other atrocities, such as the Armenian Genocide of World War I, China’s Nanjing Massacre of 1937-38, the Guatemalan Genocide from 1978-96 and the Rwandan Genocide of 1994.

Testimonies have been conducted in 63 countries and 41 languages.

“This workshop is a special opportunity for students and teachers alike,” May says. “Each collection in the VHA adds context for the others, providing multiple pathways to learn from the eyewitnesses of history across time, locations, cultures and social-political circumstances.”

The VHA is based in USC’s Shoah Foundation and its Institute for Visual History and Education, the latter of which grew out of the Survivors of the Shoah Visual History Foundation, started by Steven Spielberg. “He was inspired by his encounters with Holocaust survivors during his on-location filming of ‘Schindler’s List,’” Wasylenko says. 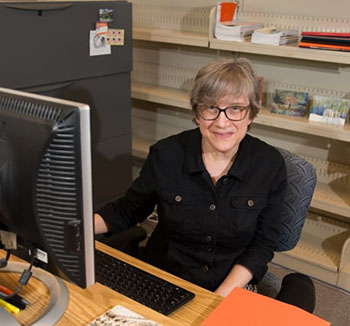 Much of the interviewing was done in consultation with historians, psychologists, and experts in the field of oral history. VHA staff has since trained thousands of interviewers, and has recruited more than a hundred regional coordinators.

“I want to increase our visibility … and get more researchers from more disciplines to show all the things that can be done [with testimony],” says the French-born Garrigou-Kempton, who also has worked for the International Federation of the Red Cross and Red Crescent Societies in Geneva, Switzerland.