Light Work Presents ‘A Place That Looks Like Home’

Light Work is presenting “A Place That Looks Like Home,” featuring the work of Todd Gray, on view in the Kathleen O. Ellis Gallery at Light Work through Oct. 22. A reception and lecture with Gray will take place on Friday, Oct. 22, from 6-8 p.m. at Light Work, with a public lecture at 6 p.m. Refreshments will be served at the reception. This event is made possible with the support of the Syracuse University Humanities Center. Also on view is “2016 Light Work Grants: Robert Knight, Lida Suchy, Marion Wilson” in the Light Work Hallway Gallery. 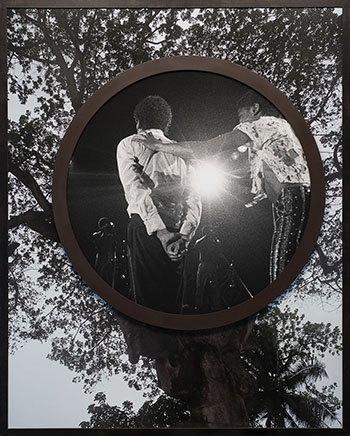 For this exhibition, Gray reframes and recontextualizes images from his personal archive that spans over 40 years of his career as a photographer, sculptor and performance artist. Gray describes himself as an artist and activist who primarily focuses on issues of race, class, gender and colonialism.

His unique process of combining and layering a variety of images and fragments of images allows him the opportunity to create his own history and “my own position in the diaspora.” Working with photographs of pop culture, documentary photographs of Ghana (where he keeps a studio), portraits of Michael Jackson, gang members from South Los Angeles and photo documentation from the Hubble telescope, Gray asserts what he refers to as his own polymorphous identity that defies definition. Inspired by the work of cultural theorist Stuart Hall, Gray invites the viewer to participate in an “ever-unfinished conversation about identity and history.”