Jonathan Mooney—a noted writer, learning activist and social engineer interested in improving the lives of marginalized groups—will deliver this fall’s Milton First-Year Lecture in the College of Arts and Sciences. 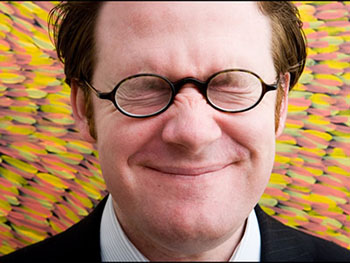 Drawing on his own life experiences and those of others with learning differences, Mooney will speak Wednesday, Oct. 19, at 7:30 p.m. in the Schine Student Center’s Goldstein Auditorium.

His lecture is part of A&S’ First-Year Experience, and is open only to first-year students in A&S and their First-Year Forum leaders. For more information, call the Office for Curriculum, Instruction and Programs at 315.443.2014.

The event is funded by the Laura Hanhausen Milton Freshman Lecture Endowment.

“Jonathan Mooney uses humor and imagination to provide a practical guide for students frustrated with the daily routine of standard education,” says Karin Ruhlandt, dean of A&S and Distinguished Professor of Chemistry. “What he has to say is particularly relevant to students whom are ‘gifted’ or struggle with LD [learning disabilities] or ADHD [attention deficit/hyperactivity disorder]. He is concerned with the state of education and with empowering students to be successful on their own terms.”

Mooney is a dyslexic writer and activist who did not learn to read until he was 12 years old. After graduating from Brown University, where he participated in the English Honors Program, Mooney and fellow student David Cole founded Project Eye-to-Eye, a mentoring and advocacy organization for people with learning differences.

Today, Project Eye-to-Eye has 20 chapters in 13 states and benefits more than 3,000 students, parents and educators.

“We are the only national mentoring movement that pairs kids with LD and ADHD with college and high school mentors who have been similarly labeled,” says Mooney, whose work has been recognized by the LD ACCESS Foundation. “Our arts-based curriculum helps mentees understand their unique way of learning and thinking, building self-esteem and skills they need to become self-advocates.”

Mooney’s publications include the book “Learning Outside the Lines” (Touchstone, 2000), which he co-authored with Cole and is in its 14th printing, and the memoir, “The Short Bus: A Journey Beyond Normal” (Holt, 2007), described as a “heartfelt rebuke to the rigid definitions of normality” (Kirkus Reviews).

Also a sought-after speaker, Mooney has lectured in more than 40 states and in three countries.

“Rarely do students get to engage with someone who is reimagining the teaching and study of universal design [in education],” says organizer Gerald Greenberg, senior associate dean of A&S and associate professor of Russian and linguistics. “With his unique brand of humor, Mooney will take them on a journey toward personal empowerment and profound educational change. Pretty amazing, since he was once deemed an ‘academic failure.'”

The Milton First-Year Lecture is named for Laura Hanhausen Milton ’51, a member emerita of A&S’ Board of Visitors who, along with her late husband, Jack ’51, has been a long-time supporter of Syracuse. The lecture is part of a series of programs that facilitates students’ transition to university life. Past speakers have included Jane Goodall, Henry Louis Gates, Isabel Allende, Steven Pinker and David McCullough.