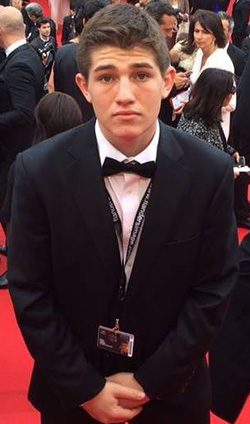 A film by Newhouse School television, radio and film student Brian Yuran has been accepted into the Big Apple Film Festival in the Narrative Shorts category. The festival will be held Nov. 1-5, in New York City.

Yuran’s film, “Blood Ties,” tells the story of a timid accountant who seeks training from a vigilante in order to avenge his brother’s murder, which he witnessed. Yuran wrote the original version of the film in a screenwriting class during his sophomore year, and made the film with fellow student Yonah Nimmer.

Yuran is a senior from North Caldwell, New Jersey. Following graduation this spring, he hopes to write horror movies and follow in the footsteps of director John Carpenter, who he calls his “cinematic idol.” He has been working on a horror feature film as his capstone project in the Renée Crown University Honors Program.

The Big Apple Film Festival is held annually in New York City. Named one of MovieMaker Magazine’s “25 Film Festivals Worth the Entry Fee,” the festival showcases and promotes films from the New York City independent film community, as well as additional specially selected films from across the country and around the world. Awards are presented in a variety of categories.