A group of local middle and high school students spent a day this summer at Skä•noñh—Great Law of Peace Center in Liverpool. They were there to learn about a new curriculum that highlights scientific and ecological knowledge of the Haudenosaunee. The program is the fruit of a U.S. Environmental Protection Agency grant to help teachers and students understand the importance of Onondaga Lake. 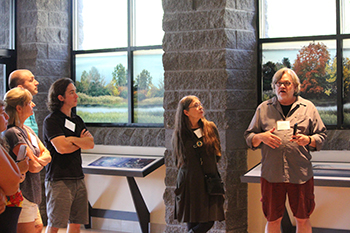 Religion Department chair Philip Arnold and his wife, Sandy Bigtree, speak to middle and high school teachers during a workshop on the ecology and history of Onondaga Lake.

The topic is close to the heart of religion department chair and Skä•noñh director Philip Arnold. “We’re talking about the indigenous origins of democracy, the origins of women’s rights, lacrosse, the indigenous food movement. All these things are important to understanding the past and creating a future based on indigenous values,” he says.

Arnold, who took over as department chair this semester, focuses on Native American traditions of the Americas in his research. For more than 35 years, he has studied New York state’s history and religious landscape in the context of the Haudenosaunee Confederacy, also known as the People of the Longhouse and the Iroquois, the name given them by French Jesuits in the 17th century.

Arnold teaches about the role of lacrosse as a sacred game to the Haudenosaunee in “Religion and Sports,” a popular course in person and online. He is the author of “The Gift of Sports: Indigenous Ceremonial Dimensions of the Games We Love” (Cognella Academic Publishing, 2012). Skä•noñh will host the Haudenosaunee Wooden Stick Festival on Oct. 8.

The festival will include Haudenosaunee food, social singing and dancing, and crafters, and a presentation by famed stick maker Alf Jacques of the Onondaga Nation. Coach John Desko and members of Syracuse’s 2017 lacrosse team are expected to attend. Sponsors include Syracuse’s Athletic Department, Department of Religion and the Humanities Center.

Arnold’s roles as department chair and director of Skä•noñh highlight the ongoing collaboration between Syracuse University and the Onondaga Nation. “Syracuse and ESF have taken great steps to acknowledge we are on Onondaga Nation territory,” he says. “This is an important relationship to maintain.”

Skä•noñh (pronounced “SKAH-no”) means “peace and wellness” in the Onondaga language. The center is on the former site of the Sainte Marie Among the Iroquois museum, which commemorates the French-fortified mission that occupied Onondaga Lake from 1656 to 1658. The center explains the Great Law of Peace, the political and spiritual center of the confederacy, and the significance of Onondaga Lake to the Haudenosaunee.

The center tells that story from the Haudenosaunee perspective—the version of history not in textbooks and preserved via oral tradition. “You’re not going to get the whole story from the Jesuit Relations,” Arnold says, referring to the written records Jesuits kept of their trips from New France to Haudenosaunee territory from 1632 to 1673.

Skä•noñh aims to present “non-Haudenosaunee people with a view of the past that they haven’t thought about and a way to think about a more viable future based on those values,” Arnold says. “I see it as a living space that has to be populated with people and events and has to keep going.” 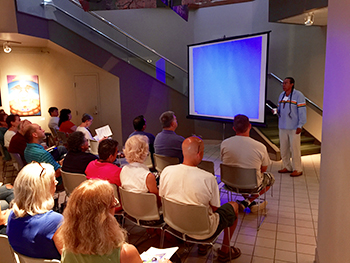 Tadodaho Sid Hill, spiritual leader of the Onondaga Nation, talks about the Thanksgiving address at Skä•noñh–Great Law of Peace Center in Liverpool.

The center has an interdisciplinary focus, drawing from departments including museum studies, women’s and gender studies, anthropology and religion. “We think of our mission as a cross-cultural discussion in an appropriate way,” he says. The collaboration between the Haudenosaunee and Syracuse University is itself an important and unusual cross-cultural relationship, he notes.

Several groups from the Honors Program and the College of Arts & Sciences’ First-Year Forum visited the center this semester. “It’s a way to orient students to the history and significance of Syracuse and Onondaga Lake,” Arnold says.

More than 90 teachers applied for 32 spots in this summer’s program, “The Ecology and History of Onondaga Lake: Exploring Haudenosaunee and Scientific Perspectives.” The workshop was structured around the Thanksgiving Address, which opens every formal gathering of the Haudenosaunee people. “We are thankful to our Mother, the Earth, for she gives us all that we need for life …” it begins.

The workshop also reminds teachers to respect the sacred aspects of Haudenosaunee culture. “It’s to amplify their voice, not to speak for them,” he says. “This was very successful and we have the basis for creating future sessions.”