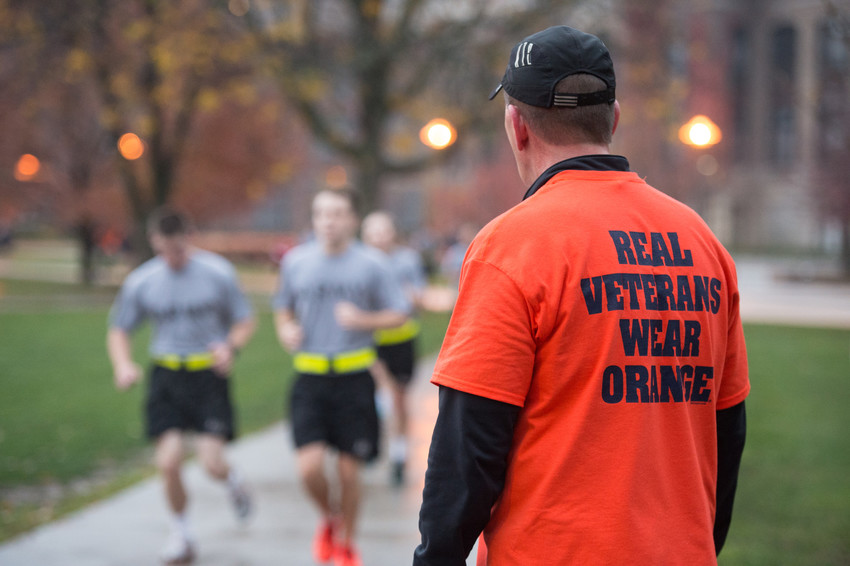 Alex Brigandi ’17 began classes on campus in the fall of 2015. He had served four years in the U.S. Navy and earned an associate’s degree at Onondaga Community College, but he still felt a little nervous about stepping onto the Syracuse University campus.

“I’m from Syracuse, but even coming to a new university and meeting people, it’s daunting. It can be overwhelming,” Brigandi says. “Coming to a new campus you have a lot of questions—classes, your benefits, where to go.”

He then found a go-to resource: other student veterans.

“When I first started I had to go out and search for those answers. Just hanging out with student veterans on campus, they had it all. It’s kind of an informational resource,” says Brigandi, an information management and technology student in the School of Information Studies (iSchool).

That’s the idea behind a new peer advising program on campus, Peer Advisors for Veteran Education (P.A.V.E.). A national project, the P.A.V.E. program matches student veteran peer advisors with incoming student veterans to help as they transition to campus life.

“It started at the University of Michigan, and Syracuse is one of 30 new schools to integrate the P.A.V.E. program,” says Brigandi, who is a team leader and peer advisor. “They started with 14 universities and they’ve had a lot of success.”

Program officials hope the connection between the established and incoming student veterans will help improve the students’ sense of connectedness to the University, create a source of support and a way to help identify any concerns that can be directed to the appropriate resource. They also see it as a way to improve student veteran academic performance and retention rate.

When John Miccio ’17, a six-year veteran of the U.S. Army and president of the Student Veterans Organization (SVO), arrived on campus, he also found a connection with other veterans. He had been assigned a transfer student mentor, but Miccio had different concerns than the typical transfer student. He lived off campus with his service dog, instead of on South Campus, had concerns about off-campus parking and was a bit older than most students.

“I ran into another veteran and we ended up hanging out a lot when I first got here,” says Miccio, who is an information management and technology student in the iSchool. “This program is basically going to ease that transition or make it a little bit easier.”

Miccio also notes that many student veterans, the largest majority of whom range in age from 25-34, also have families and have questions about family-related issues, such as daycare. A veteran with a shared experience will have that knowledge.

“When I first got here, I actually didn’t even hear about SVO for a while,” Miccio says.

Brigandi recalls one time when he thought he would run out of military benefits to cover tuition and would have to end up paying out of pocket. Instead, other student veterans told him about someone at the University who could assist him in navigating the financial side of his military benefits.

“It’s the veteran-specific advice that can really help,” Brigandi says.

So as soon as Brigandi heard about the P.A.V.E. program, he knew he wanted to be involved.

“I just think back to my first day,” Brigandi says. “I had so many questions it would have been nice to ask a mentor.”

In launching the program, Brigandi and two Syracuse University staff members from the Office of Veteran and Military Affairs attended national P.A.V.E. training in August and recruited peer advisors over the summer.

Willingness to help others

To be a peer advisor, a student veteran has to be in good academic standing, work well with others, commit to the program for a year and complete some basic training, Brigandi says. Peer advisors need to reach out to peers at least once a month and touch base with their mentee by phone or email to check in with them to see if they have problems they can help resolve, or refer them to resources.

“They have to have a motivation to help others. The willingness is a big thing,” Miccio says. “They are the first point of contact.”

The time requirements aren’t substantial, but the gains for both the peer advisor and new student veteran can be great.

For more information or to apply to become a peer advisor, visit Svosu.org/pave.

The D’Aniello Institute for Veteran and Military Families (IVMF) had the unique opportunity to gain two United States Air Force Academy (USAFA) cadets to assist in programs and research. Cadets Kamryn Olkowski and Mayra Quintana joined the IVMF through the…

Since 2017, Syracuse University has had the privilege of partnering with the Pat Tillman Foundation (PTF) as one of 16 university partners. This year, Anthony Ornelaz, a student in the master of fine arts program in the College of Arts…