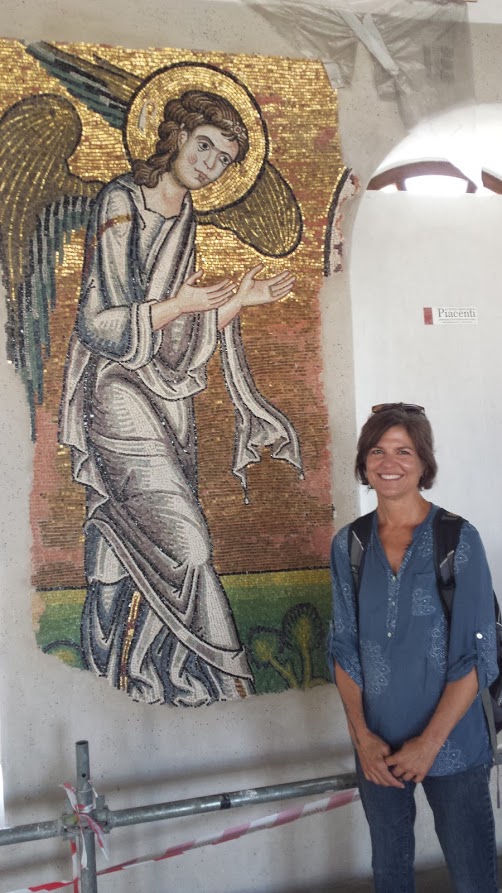 Professor Virginia Burrus visited the Church of the Nativity in Bethlehem, where restorers had recently uncovered a mosaic of a golden angel.

In the Church of the Nativity in Bethlehem, where Jesus is believed to have been born, Professor Virginia Burrus stood atop scaffolding to get an up-close look at a newly uncovered mosaic of a brilliant golden angel.

Hidden under centuries-old layers of plaster, the angel was discovered as part of a restoration project of the 12th century decorations that adorned the holy site, originally built in the 4th century. The angel was one of seven, 8-foot-high heavenly figures high above the nave of the church that is sacred for Christians around the world.

For Burrus, who is studying the practices of prayer and contemplation of ancient Christians, the precious art from antiquity evoked the role of the senses in worship and a recognition of the countless pilgrims who had visited these spaces before her.

“I was experiencing what I was trying to write about. It’s what we lose when we think of religion, and Christianity in particular, as just a set of ideas or beliefs rather than a complex way of relating to the world in a very material, sensual kind of way,” Burrus says. “That’s the magic that comes with contact with the things that people have considered holy for so many centuries—so many eyes have gazed at and fingers and even lips have touched these objects that are still spectacularly beautiful and vivid.”

The experience of connecting with the earthly, material objects of Christianity at the Church of the Nativity was one of many for Burrus who spent 10 months as a fellow-in-residence at the Israel Institute for Advanced Studies in Jerusalem as a member of the Poetics of Christian Performance research group.

Burrus, the Bishop W. Earl Ledden Professor of Religion in the College of Arts and Sciences, returned home over the summer after spending the academic year with seven other scholars from the United States, Israel and Italy, representing the fields of religion, history, liturgical studies, art history and musicology. “It was such a privilege to be invited into this group,” she says.

The scholars met weekly to explore practices of prayer and liturgy in ancient and medieval Christianity and visit holy sites in and around Jerusalem. 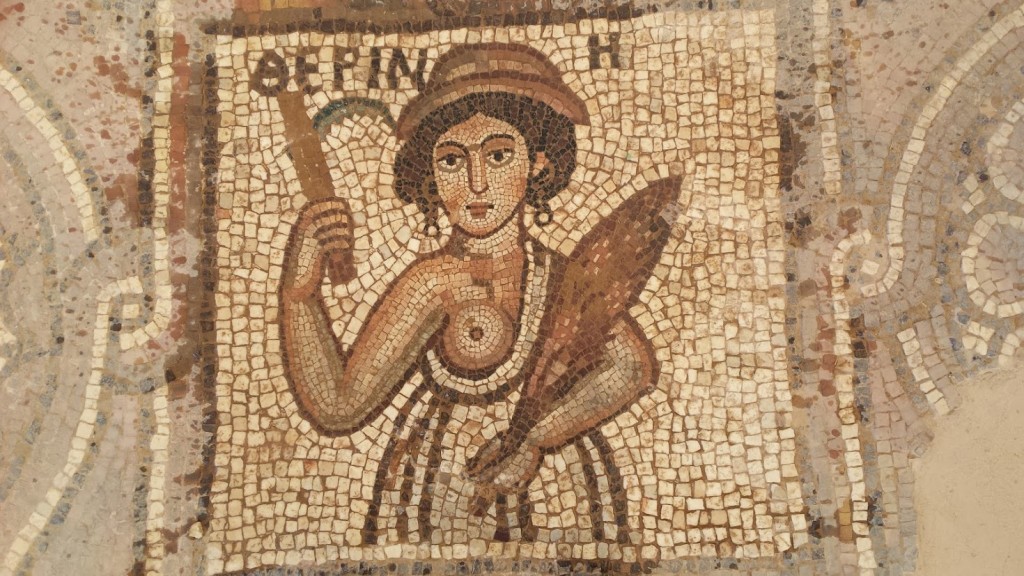 “So often Christianity is viewed as a set of doctrines. The idea was to turn away from the doctrinal and to focus on practice,” Burrus says. “Everyone pursued their own research, but we were constantly folding it into a shared conversation. It’s a precious opportunity to do that at this point in one’s career—to return to that kind of collegial classroom.”

Burrus also continued to work on her upcoming book, “Ancient Ecopoetics: Cosmology, Narrative, and Practice in Early Christianity.” Her work has focused on the literary and cultural history of ancient Christianity, but she is more recently exploring other ways in which ancient Christianity can be a resource for ecological thinking.

“I knew a big part of this book needed to deal with practice and material culture and especially with the way ancient Christians cultivated relationships to the non-human world—the landscape, with its flora and fauna, buildings and relics and icons,” Burrus says. “I knew it would take me into territory that I wasn’t really as familiar with because I work mostly on text and ideas. So it was perfect for me to be part of a research group in which I could focus on practice and material culture.” 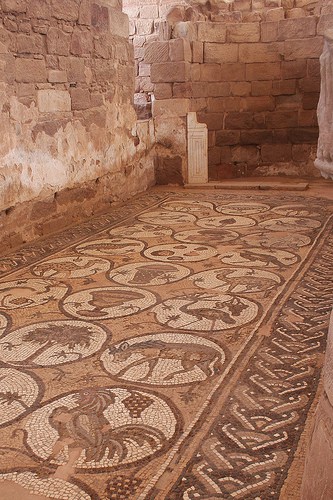 Working with the other scholars and being able to visit the Christian holy sites added greatly to her writings. She traveled throughout Israel and the Palestinian territories, also visiting Jordan, Cyprus, Sicily, Istanbul and Rome. There she visited museums, archeological sites, and churches and monasteries that are still active but with origins in late antiquity or the Middle Ages.

“The most exciting part is not only to see something in a museum but to go to the site where the object was found and imagine it in context or to visit things that are still in situ,” Burrus says. “There are always all kinds of things that you couldn’t imagine without being there.”

One such moment was a trip to Petra in Jordan, a frequently visited UNESCO World Heritage site that is famous as an ancient city carved into the stone cliffs.

“It’s a stunning site geographically, with its built monuments sort of melting into the landscape. What I hadn’t known until I started reading about it is that there are three exquisite Byzantine church ruins at Petra, which has had a layered Christian history, in addition to the Nabatean one that is all most tourists hear about,” Burrus says. Whereas the classical Greek or Roman or biblically related sites have been traditionally most valued, the Byzantine period has mostly been overlooked at archaeological sites in the Mediterranean and Middle East.

In one church, there was an elaborate mosaic floor covered with representations of animals. “Worshippers were constantly in the presence of these often very vividly rendered images of animals and plants,” Burrus says. Many of the animals are local, such as donkeys, birds and goats, but many are not local. “How is the church situating itself not only in relationship to its immediate environs but also evoking the broader world?”

Some might say the animals are on the floor because they would be considered lowly, but Burrus rejects that assumption. “Then it’s almost denigrating the natural world; I can’t imagine that,” Burrus says. “Many of them are quite exquisite.”

Burrus suggests at the very least people are being invited to “see the sacred space of a church as part of this kind of teeming creation.” 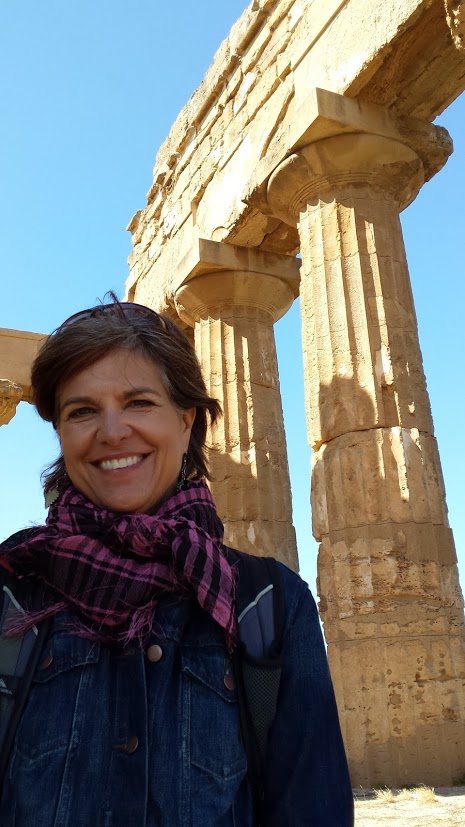 Virginia Burrus at an ancient Greek temple in Selinunte, Sicily

Visitors have to look at the floor to see where they are going, or maybe they would always stand in a certain spot near a certain animal, developing a connection. “There are all kinds of ways these images must have stimulated the imagination and made people think about themselves as part of the non-human world,” she says.

As an interpretive scholar, Burrus is interested in invoking the richness of ancient piety in a way that makes it relevant to how people experience our current relationship with the non-human world. Christianity, Burrus says, has typically been seen as disregarding its interconnectedness with the natural world, with its human and otherworldly focus and message of dominion over the rest of creation.

“I don’t deny that Christianity has most often played a destructive role in relation to the environment. But I want to show that there are also resources in Christian piety or practice from antiquity that we can turn back to and learn from,” Burrus says. She wants there to be a broader intellectual conversation about religion and ecology to meet the challenges of today. “We don’t know what might turn out to be a resource,” Burrus says. “We need inspiration. We need encouragement. We need to feel something more than just fear, despair, and guilt. We need to feel intrigued and provoked by new thoughts.”