On Thursday, Sept. 29, from 6-8 p.m., Edgar Paiewonsky-Conde is returning to the Point of Contact Gallery to present his new body of minimalist and visual poetry. The minimalist “icons” will be read and projected, whereas the purely visual “eye poems” will be projected in silence in a variety of digital registers. The act includes a showing of a number of poem-booklets with transparent pages, which must be physically (not virtually) presented in order to articulate their meaning. Each poem progresses through the transparencies and reveals its sense in a three-dimensional space. 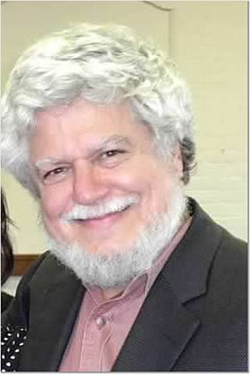 Over the years Paiewonsky-Conde’s writing has evolved into minimalist verbal poetry and is titled “icons/iconos.” Simultaneously, the poetry in two languages and the shift toward a radical minimalism has led to a purely visual, supra-linguistic poetry he has named “eye poems.” Responding to a new aesthetic order, this project does not fit into the categories of visual art or poetry. Each of the icons tries to capture, in the manner of a formula, an essence of the material world. While the eye poems make use of an archetypal figure, distilled by the poet, they explore and reveal a numeric essence.

Paiewonsky-Conde was born in Samaná, Dominican Republic. He obtained his Ph.D. in Hispanic literature at New York University with a thesis on the dialectics of desire in the first volume of Don Quijote. His poetry has appeared in literary magazines in the United States, Latin America and Spain, and his poems in English have been included in three anthologies of North American poetry. Paiewonsky-Conde lives in Central New York, where he teaches Latin American literature and Cervantes at Hobart & William Smith Colleges.

Point of Contact Gallery is located in the Nancy Cantor Warehouse, 350 W. Fayette St., Syracuse.  The event is free and open to the public. Refreshments will be served. Free parking is available in the Syracuse University lot on the corner of West and Fayette streets.