The Central New York Humanities Corridor marked the 10th anniversary of its partnership with the Andrew W. Mellon Foundation with a special celebration in New York City. 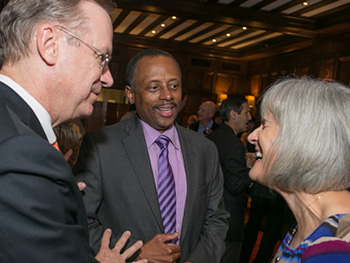 On Wednesday, Sept. 21, more than 50 friends and alumni of Syracuse University converged at Lubin House to toast the collaboration, which has spawned one of the nation’s largest, most ambitious research projects of its kind.

“The humanities and the liberal arts are central to the Syracuse University educational experience, and are an important part of our newly minted academic strategic plan,” Wheatly told the overflowing room, which included A&S Dean Karin Ruhlandt, Dean of Libraries David Seaman and Humanities Center Director Vivian May. Among alumni in attendance were A&S Board of Visitors members Rick Dobbis ’70, Len Elman ’52 and Jan Raymond ’65. “The project has created ‘corridors of intellect’—attracting stellar faculty and new, inspired talent to Central New York, while drawing on the distinct histories and assets of the region.”

Wheatly added that the Humanities Corridor’s success has inspired other regional initiatives, such as the Mellon-funded Humanities Without Walls consortium, based at the University of Illinois at Urbana-Champaign.

The Humanities Corridor is a large-scale interdisciplinary project, co-founded by Syracuse, Cornell University and the University of Rochester. Since 2011, it has grown to encompass the New York Six Liberal Arts Consortium: Colgate and St. Lawrence universities, as well as Hamilton, Skidmore, Union and Hobart & William Smith colleges.

To date, the project has sponsored more than a hundred different working groups, coordinated by nearly 300 regional scholars. The working groups, in turn, have generated over 400 scholarly activities, including panel discussions, lectures, screenings, readings, performances, workshops and masterclasses.

Lambert praised Mellon for its vision and generosity. And timing.

Indeed, the Humanities Corridor has evolved into a thriving institutional entity. Based in the Humanities Center (which, in turn, is located in the historic Tolley Humanities Building), the project consists of seven areas of humanistic inquiry: philosophy; linguistics; visual arts and culture; musicology and music history; the digital humanities; language, literature and culture; and archives and media.

Lambert said all seven areas benefit from interinstitutional agreements and cost-sharing mechanisms, leading to traditional and cutting-edge scholarship. He cited multiple examples—from the cyber-laced workshops of the Digital Humanities and Archives & Media clusters, to conferences and symposia about the area’s rich literary and philosophical culture, to world premieres of original music.

“One of our projects was a two-year long study of pipe organs, in which faculty members toured historical churches throughout the state to examine and mount performances by instruments dating back to the 17th century,” Lambert continued. “Some of the organs were brought here by immigrants from Germany, the Netherlands, England and France.”

Since 2006, the Mellon Foundation has awarded more than $5 million to the Humanities Corridor. This support includes awards from two years ago, designed to keep the Humanities Corridor a program of the Humanities Center in perpetuity. These recent awards—$2 million (Syracuse), $750,000 (Cornell) and $500,000 (Rochester)—also have formed the basis for a matching endowment program at each institution. Fifteen months remain for all three institutions to meet their campaign goals, bringing the total endowment to $6.5 million. 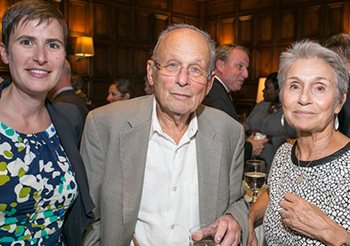 “One of the goals of the Humanities Corridor is to build a lasting infrastructure of collaboration,” Lambert said. “The establishment of relationships between people and institutions is as important as the financial resources supporting such collaborations.”