The Martin J. Whitman School of Management honored Deborah Leone ’86, ’87 MBA with the Jonathan J. Holtz Alumna of the Year Award, the highest honor given to graduates of the Whitman School, during a ceremony Sept. 15. Established in 1986 by Jonathan J. Holtz ’78, the award recognizes an outstanding alumnus each year for his or her professional accomplishments and service to Syracuse University. 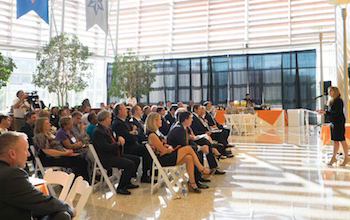 Alumni, faculty and staff were all recognized during the annual Whitman Awards.

Leone is the director of internal audit at Goldman Sachs. She serves as an observer on a variety of Goldman Sachs committees and co-chairs the firmwide Women’s Network. Leone joined Goldman Sachs as an analyst in the controllers department in 1989. She was named managing director in 2003 and partner in 2008. She spent four years as controller for the Investment Management division before assuming her present role. Prior to joining the firm, Leone started her career at Price Waterhouse in the financial industry service group. She is a CPA and a member of the UJA Federation of New York Professional Women’s Philanthropy. Leone holds a bachelor’s degree in accounting and an M.B.A. with a concentration in finance and accounting, both from the Whitman School, and she sits on the Whitman Advisory Council.

Martin L. Berman ’62 (A&S), who received the inaugural Orange Entrepreneur of the Year award, was also recognized at the ceremony. Will Cass ’08 (WHIT/NEW) was honored as the Whitman Young Alumnus of the Year, and the Dean’s Citation for Exceptional Service was presented to Chad Bender ’05. Members of Whitman’s faculty and staff, as well as students, also received honors, including:

Staff Member of the Year Award