On Saturday, Sept. 17, Miracle Rogers, a senior in the School of Education, and Bilal Vaughn, a senior in the College of Engineering and Computer Science, were crowned 2016 Homecoming Queen and King, respectively.  The longstanding tradition recognizes some of the University’s most spirited seniors. 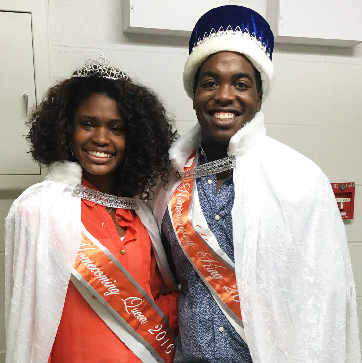 In addition to Rogers and Vaughn, the members of the 2016 Homecoming Court include Khianna Calica, Jonathan Gordon, Andrew Martini, Jennie May, Andrew Ramos, Nedda Sarshar, Beth-Elle Schussler, and Liam Sullivan.

Throughout the year, the members of the Homecoming Court with work with the Traditions Commission and the Office of Student Activities to plan key student events, including Winter Carnival, National Orange Day, and Senior Celebration.  Additionally, the King and Queen will often return to crown the following year’s royalty during Orange Central.

To learn more about these traditions and the Homecoming Court, visit the Student Activities website.