George Arthur Akerlof will deliver the 2016 Paul Volcker Lecture in Behavioral Economics, titled “Phishing for Phools,” on Wednesday, Sept. 28, at 4 p.m. in Goldstein Auditorium. The lecture is free and open to the public; RSVP is strongly recommended as there is limited seating. Free parking will be available at the University Ave Parking Garage. The event will be live streamed the day of the event at: maxwell.syr.edu/Volcker. 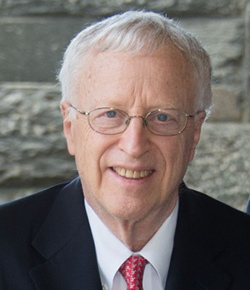 Akerlof is currently a University Professor at the McCourt School of Public Policy at Georgetown University. He is a 2001 co-recipient of the Nobel Prize in Economic Sciences, which honored his development of a theory of asymmetric information and its effect on economic behavior. The Nobel Committee cited Akerlof’s 1970 paper, “The Market for ‘Lemons,’” which for the first time described the role of asymmetric information in causing market failure. Akerlof is the Daniel E. Koshland, Sr. Distinguished Professor Emeritus of Economics at the University of California, Berkeley. He received his B.A. from Yale and his Ph.D. from the Massachusetts Institute of Technology. He was a senior economist at the President’s Council of Economic Advisers, past president, vice president and member of the executive committee of the American Economic Association and member of the Council of the Econometric Society. He is a trustee of Economists for Peace and Security, and co-director of the Social Interactions, Identity and Well-Being program of the Canadian Institute for Advanced Research.

His fields of interest include macroeconomics, monetary theory and behavioral economics. His newest book, “Phishing for Phools: The Economics of Manipulation and Deception,” is co-authored with this year’s Inaugural Volcker Lecture speaker, Robert J. Shiller.

The Volcker Chair was endowed by Robert Menschel, senior director at Goldman Sachs Group and trustee emeritus of Syracuse University.

Leonard Burman, the Paul Volcker Chair in Behavioral Economics, hosts the Paul Volcker Lecture and Symposium. Burman, in collaboration with colleagues in Maxwell’s Center for Policy Research where he is a senior research associate, organizes an annual conference or lecture on a public policy topic drawing on the insights and perspectives of behavioral economics. In addition, graduate students in public administration and economics organize a companion research symposium featuring scholars working at the cutting edge of research in behavioral economics and public policy.