On Sept. 12, The Cold Case Justice Initiative (CCJI) hosted a briefing on the Emmett Till Reauthorization Act of 2016 in the Rayburn House Office Building in Washington, D.C. The event was sponsored by Rep. John Lewis (D-GA), who, along with Sen. Richard Burr, is leading a bipartisan effort to pass the legislation.

At this special event, Paula Johnson and Janis McDonald, professors of law and co-directors of CCJI, and members of a coalition pushing for reauthorization, came together to address the profound necessity for this effort. 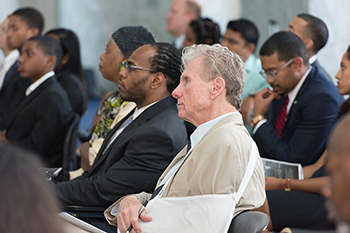 The crowd listens during a briefing on the Emmett Till Reauthorization Act of 2016 held Sept. 12 in Washington, D.C.

“We held this briefing in our nation’s capital as a way to demonstrably press the House to reauthorize the Till Act before it expires,” says Johnson. “The passage of the bill will support the efforts of families and advocates who seek justice for racially motivated killings of loved ones during the Civil Rights Era and beyond.”

The Coalition for Emmett Till Reauthorization Act is composed of organizations including the NAACP and Southern Poverty Law Center, fellow institutions of higher education Northeastern University and Emory University, members of Emmett Till’s family, and activist Alvin Sykes.

On July 18, the U.S. Senate unanimously approved the legislation, which now must be passed by the U.S. House of Representatives. The Senate co-sponsors of the bill include Sen. Claire McCaskill (D-MO), Sen. Patrick Leahy (D-VT) and New York Senator Charles Schumer (D-NY).  In the House, Rep. John Katko (R-NY) of Syracuse joined a bipartisan group of legislators calling for the House’s passage.

“As a former federal prosecutor, I recognize the importance of investigating and resolving unsolved racially motivated crimes and acts of violence across our nation. Reauthorization of the Emmett Till Unsolved Civil Rights Crime Act is critical to that mission, and I’m proud to support this bipartisan effort,” says Katko. “I applaud Syracuse University for its steadfast efforts in working to renew this important legislation, as well as the ongoing interdisciplinary work of all involved with the Cold Case Justice Initiative.”

“I was proud to co-sponsor and help pass The Emmett Till Reauthorization Bill in the Senate that will help right terrible, unsolved civil rights crimes,” says Schumer. “I’d like to thank the Cold Case Justice Initiative and its co-chairs from Syracuse University, Professors Paula Johnson and Janis McDonald, for their outstanding leadership on this issue. In honor of Emmett Till, I urge my colleagues in the House to immediately take up this measure so it can allow us to examine the crimes of the past and help us prevent them in the future.”

“The coalition was honored to read a letter sent to Congressman John Lewis in support of the reauthorization effort,” says McDonald. The document, which was signed by the President of the Southern Poverty Law Center, Richard Cohen; Myrlie Evers Williams, activist and the widow of Medgar Evers; Rita Schwerner Bender, the activist and widow of Michael Schwerner; and G. Douglas Jones, the former U.S. Attorney who prosecuted the killers of the four young girls at the Sixteenth Street Baptist Church in Birmingham, was an incredible demonstration in support of all of those families who never received any kind of justice and a necessary reminder of the sacrifices all of these families have endured.”

In its effort to build public support and create further pressure on the House to pass the bill, the coalition has started an online petition on Change.org. A reauthorized act will require a full accounting of victims, a more thorough investigation of cases, more staffing by the Department of Justice and expedited Freedom of Information Act responses.

Other participants at the briefing included representatives from families dealing with the killings of relatives. Cordero Ducksworth, the son of Cpl. Roman Ducksworth, spoke about the circumstances around his father’s killing in 1962, when he was shot by a local police officer in Mississippi in a dispute over segregated seating on a bus. The CCJI has worked with his family to provide information and justice in this case.

“The years have passed but not erased the pain and grief that our families experience,” says Deborah Watts, a cousin in the Till family and co-founder of the Emmett Till Legacy Foundation. “In Emmett’s name and with this legislation we are bringing together voices from the left and right.”

“It should be self-evident that organizations seeking to document perpetrators and victims and advance investigations where prosecutions are still possible need as much access to government documents and information as can be afforded under law,” says investigative journalist Ben Greenberg, who has worked with the CCJI and the Ducksworth family on their case. “For the family members, information about the violent incidents that took loved ones from them was transformative—allowing their families to find healing and offering avenues for restorative justice even after the criminal justice system had failed them.”