The Sport Management Club at Syracuse University was honored with the Community Team Spirit Award at the Salvation Army’s 45th Annual Civic Celebration held Sept. 14 at the Oncenter. Kevin Reese ’17, co-chair of the Club’s Charity Sports Auction, accepted the award on behalf of the club in the company of more than 800 attendees, including the guest speaker, actor Richard Gere. 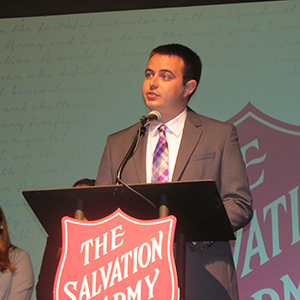 Kevin Reese ’17, co-chair of the Club’s Charity Sports Auction, accepted the award on behalf of the Club.

This prestigious award recognizes the efforts of the Sport Management Club, a student-run organization in Falk College’s sport management department whose 11th Annual Charity Sports Auction raised $40,470 for the Salvation Army of Syracuse. A silent auction was held Dec. 2, 2015, during a Syracuse University men’s basketball game, where auction supporters bid on hundreds of items, from sports collectables to major sporting events tickets. The club partnered with Steiner Sports Memorabilia to host an online auction, as well.

“It is truly an honor to see the Sport Management Club at Syracuse University receive the Community Team Spirit Award from the Salvation Army this year,” says Falk College Dean Diane Lyden Murphy. “Our students, and the faculty and staff working with them, dedicate a great deal of time and energy to present the Annual Charity Sports Auction, which has benefited countless charitable organizations in Central New York since its inception in 2005. The fundraiser demonstrates how students embrace social responsibility and their tireless commitment to serving others and supporting wellness for individuals, families and communities. We extend our congratulations and deepest gratitude to all who have invested in this success.”

“The Sport Management Club at Syracuse University is privileged to receive the Salvation Army’s distinguished Community Team Spirit Award as it embodies our annual year-long mission to together embrace the community that our students call home for four years,” says Kate Veley, Sport Management Club co-advisor and advisor to the Charity Sports Auction. “We were grateful for the opportunity to support such an integral part of the Syracuse area and thankful to all those who donated or bid on the over 550 items that ensured our success. Our students worked tirelessly at ‘Doing the Most Good’ on behalf of the Salvation Army and we couldn’t be prouder of their accomplishments.”

“The Salvation Army was delighted to be the charity of choice for the Sport Management Club at Syracuse University’s Charity Sports Auction in December,” says Major Karla Clark, CEO Onondaga County of The Salvation Army. “Without the support of local organizations, we wouldn’t be able to provide the quality of services we offer. It’s wonderful to have future leaders focused on the betterment and welfare of our community.”

The Salvation Army’s Annual Civic Celebration is one of Syracuse’s most enduring community events, honoring selected community members for their civic and charitable efforts, updating supporters on the organization’s work and featuring a nationally known speaker. In 2008, in honor of its 50th anniversary for excellence in education and contributions to the Syracuse community, Falk College’s School of Social Work received the Salvation Army’s Community Team Spirit Award.

Since its founding in 2005, the Sport Management Club has raised over $312,000 for local charities. Previous beneficiaries of the charity auction have included the Boys & Girls Clubs, American Diabetes Association, Golisano Children’s Hospital at Upstate, the Ronald McDonald House Charities of CNY, the Upstate Cancer Center, Special Olympics New York, Food Bank of CNY and Make-A-Wish of Central New York.

For more information about this year’s charity auction or how to support it, please visit www.sucharitysportsauction.com.