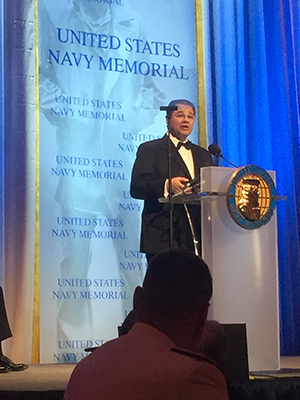 The Lone Sailor Award is presented by the USNMF to Sea Service veterans who have distinguished themselves, drawing upon their Sea Service experience, to become successful in their subsequent careers and lives while exemplifying the core values of honor, courage and commitment. D’Aniello is a veteran of the U.S. Navy.

“It was my time in the Navy that really accelerated my transition from boyhood to manhood,” D’Aniello said in his remarks at the ceremony. “… The Navy instilled values in me that are part of my business today—integrity, professionalism and trust.

“I am proud of my service and intend to continue to give back to veterans’ organizations, like the work being done at my alma mater, Syracuse University, through the Institute for Veterans and Military Families,” he said.

“Dan D’Aniello is a proud veteran who has used his military service and experience as the strong foundation for great success in business and philanthropy,” says Syracuse University Chancellor Kent Syverud. “We congratulate him on this richly deserved award.”

“Dan has dedicated his life to service—first in uniform and later as an entrepreneur, business leader and philanthropist,” says Vice Chancellor for Veteran and Military Affairs Mike Haynie. “We are extremely grateful for all of his support and congratulate him on this great honor.”

D’Aniello is chairman and co-founder of The Carlyle Group, based in Washington, D.C. Prior to forming Carlyle in 1987, he was vice president for finance and development at Marriott Corp., where he was responsible for valuation of all major mergers, acquisition, divestitures, debt and equity offerings, and project financings. Before joining Marriott, D’Aniello was a financial officer at PepsiCo Inc. and Trans World Airlines.

In addition to his service to the University’s Board of Trustees, D’Aniello is a member of the Chancellor’s Council and the corporate advisory council to the Martin J. Whitman School of Management. He is a strong supporter of the Institute for Veterans and Military Families (IVMF).

D’Aniello is a member of the Council for United States and Italy; the John Templeton Foundation; the Lumen Institute; the U.S.-China CEO and Former Senior Officials’ Dialogue of the U.S. Chamber of Commerce; the vice chairman of the board of trustees of the American Enterprise Institute for Public Research; and chairman of Wolf Trap Foundation for the Performing Arts. He is the former chairman and former and/or current director of several public and private companies in which Carlyle has or had significant investment interests.